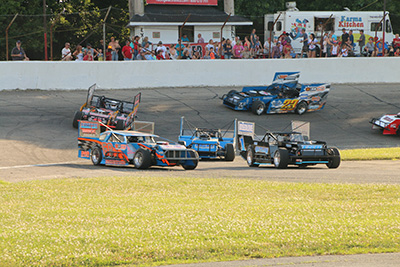 After a one-year absence because of the pandemic the Outlaw Figure-8 Late Models return Sunday, July 4. Indianapolis driver Eddie VanMeter will be seeking his third consecutive win in the 50-lap feature that tops the Best Way Disposal Figure-8 Madness presented by The Jane Pauley Community Health Center on Sunday starting at 7 p.m. As is always part of the July 4 racing cards the popular School Bus and Trailer races will take place in the crossover. The Hart’s Ford Division and Marcum’s Welding Front Wheel Drives will be in action on the Figure-8 course as well. The night is capped off by the annual fireworks show.

Five local divisions will be in action on Saturday starting at 7:30 p.m. Jeff Marcum will be looking for his third feature win in the McGunegill Engine Performance Late Model division coming off a second place finish in the PGG 100 two weeks ago. Shane Isgrigg will be attempting to make it four consecutive feature wins in the Hart’s Auto Ford Division with Matthew Adams and Dawson West seeking a second feature victory in 2021. Jimmy Kirby had his four race winning streak snapped several weeks ago after crashing before the feature which gave Ron Phipps is first win of the year after a string of runner-up showings. There have been four different winners in five races for the Marcum’s Welding Front Wheel Drive division with Indianapolis driver Donald VanValkenburg III the only repeat winner. Josh Sage, Elliott McKinney and Tray Bare have all scored feature wins at Anderson. Austin Cory and Chad Cory have captured the feature wins in the Thunder Roadster division this year.

Qualifications are set for 5:30 p.m. Sunday with racing at 7 p.m. Adults tickets are $15, children at $5 and children five and under are admitted free. Tickets for Sunday, July 4 can be purchased at the ticket office 10am until 4pm on Friday and after 11am both Saturday and Sunday.