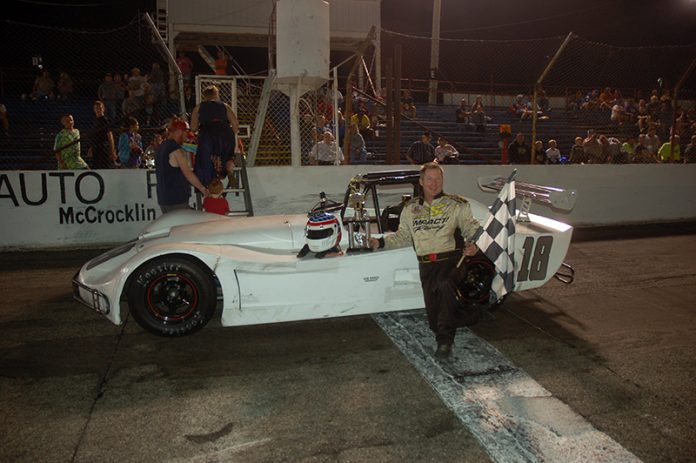 Veteran driver Dave Osborne became the fourth driver to visit victory lane in Thunder Roadster action at Anderson Speedway this season.
After Doug Dugger won the opening night feature for the division, John Robbins ran off six consecutive wins. Both in the last two appearance Marty Griffin and Osborn has driven into the AutoFarm McCrocklin Ford Winner’s Circle.
Griffin, looking to make it two feature wins in a row, took the early lead when Robbins drifted high in the second corner on the opening lap and lost three positions.
With Griffin on the point, Osborne moved into the second spot on lap six with an inside pass of Dugger, Robbins made a similar move a lap later.
Griffin’s comfortable lead was wiped out when Mitch Meyer spun on the front straight on the 13th circuit.
On the Interstate Auto Auction restart Osborne used the outside line to challenge Griffin, finally completing the pass on the front straight. With five circuits remaining Robbins got inside of Griffin entering turn three.
At the checkers Osborne won by six-tenths of a second over Robbins with Griffin, Dugger and Rodney Oliver completing the top five.
Osborne said his racing buddy Oliver purchased the car for him to drive during the week.
“We only completed the car last night,” he said. “We had a lot of help in preparing the car. We battle on the race track, but help each other out.”
Osborne said since he not competed on a regular basis at Anderson Speedway this year, he was unaware of the double file restart.
“I thought we restarted in a straight line,” he said. “When the flagman waved me alongside Marty (Griffin), I thought I had a chance to win.”
Osborne set fast time during qualifying edging out Dugger and Robbins.
Robbins recorded his fourth heat win of the season leading the first race the entire distance.
Osborne moved into the second spot on the seventh circuit with an inside pass of Griffin coming off the fourth corner.
Brad Kendle the entire way in the second heat race beating Trent Gossar, making his first ever Thunder Roadster appearance by 1.4-seconds with Mitch Meyer finishing third.