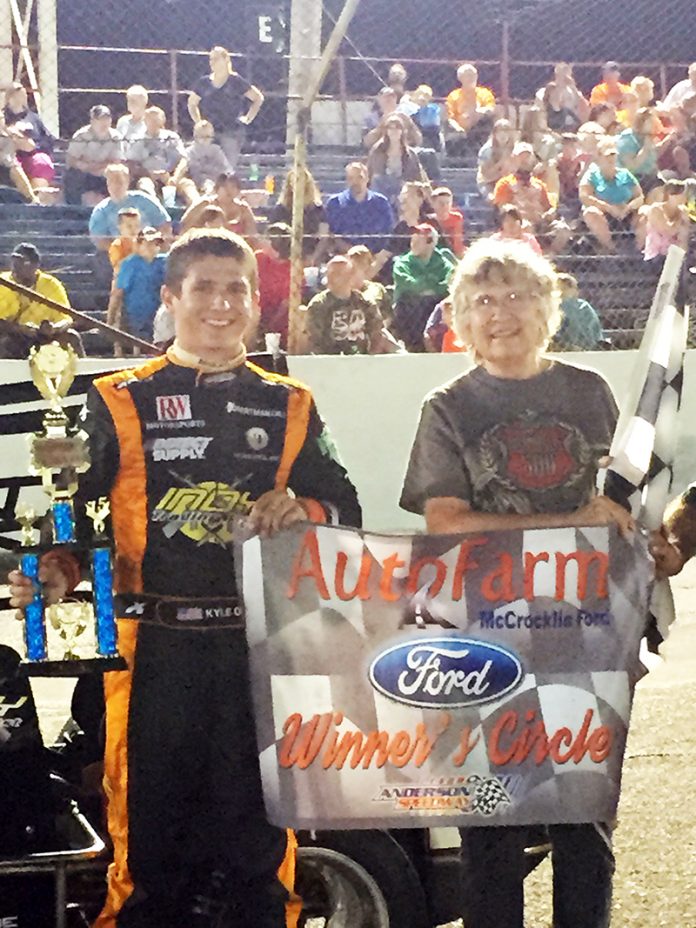 In the closest finish in the history of the Mel Kenyon Midget Series, Kyle O’Gara nipped Dameron Taylor to win the inaugural Bob Carey Memorial at Anderson Speedway on Saturday.

O’Gara and Taylor gave the fans in attendance on The Herald Bulletin night at Anderson Speedway something to talk about for years to come.

Taylor took the lead from rookie point leader Trey Osborne on the 11th circuit and opened a comfortable lead. O’Gara, a two-time winner at Anderson Speedway, was caught in traffic at the halfway mark of the 50 lap feature when he started a steady march to the front.

O’Gara passed Osborne with an inside move on lap 39 and set his sights on Taylor. He closed the margin and with five laps the two raced nose to tail for the top spot.

Several times O’Gara attempted to make the pass on the inside, but Taylor’s momentum in the high groove kept him on the point.

Coming off the fourth corner on the final lap, O’Gara made a strong run on the inside and beat Taylor to the checkered flag by 4-one thousandths of a second.

After the race O’Gara and Taylor hugged each other in the AutoFarm McCrocklin Ford winner’s circle.

Dossey set fast time, captured his first heat win of the season and then recorded his 4th feature win of the year.

With the full field inverted for the start Dossey had to work his way through the field, finally moving into the second spot with a pass of Bret Miles Jr. on the 11th lap.

From there Dossey closed the gap on leader Wes Russell Jr., taking the lead on lap 16 by making the pass coming off the fourth corner.

Coming home in third was Jeff Marcum with Miles and Tyler Marsh rounding out the top five.

Adam Lee recorded his fifth feature win of the season in the Marcum Welding Pro Compact Division after posting his fifth quick time of the year.

Trent Gossar, the winner of his fourth consecutive heat race, Tim Neal and Jeff Williams finished in the top five.

John Robbins battled back from a second lap spin on the infield and passing early leader Brad Kendle with a bump and run move in turn four and completing the lap with an outside pass entering turn one on lap 17.