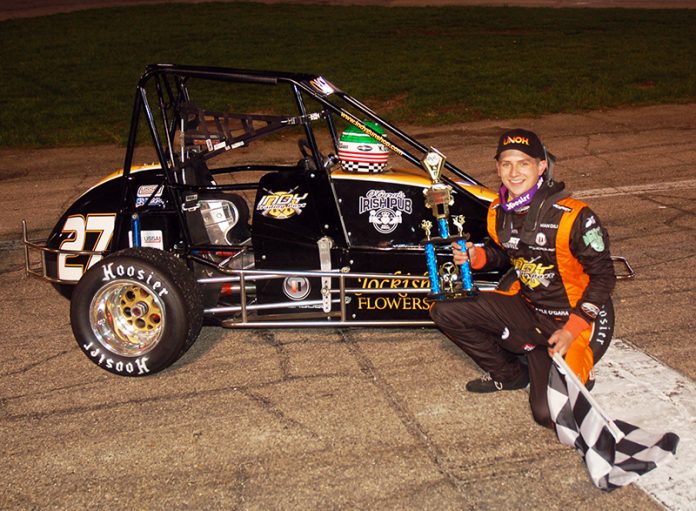 O’Gara has made two starts at the famed quarter-mile oval and has twice pulled into the winner’s circle to collect the winner’s hardware.

O’Gara took advantage of the inversion which allowed him to start on the pole and he was never seriously challenged for the top spot over the second half of the race.

O’Gara was closely followed in the 30-lap feature by Jessica Bean and Dameron Taylor, but pulled away at the midway point to win comfortably.

Bean, Taylor, Clayton Gaines and Logan Huggler rounded out the top five in a caution free race.
“I’m really thankful,” O’Gara said of the win in the Indy Trading Post Midget. “This is just a great opportunity and the hard work paid off.”

It was a night of first-time Anderson Speedway heat winners on
Saturday.

Huggler led the entire distance to record the victory in the first heat by holding off fast qualifier Taylor by three-tenths of a second.

The two front-runners were followed to the checkers by O’Gara, Ryan Huggler and Nate Foster.

Alhlea Albertson recorded her first career win at Anderson Speedway by first holding off Clayton Gaines and then Jessica Bean.

Bean passed Gaines with an inside move on the seventh circuit coming off the fourth corner.

Kent Kriegbaum and Amanda Davies rounded out the top five.

A blanket could have covered the top three drivers in qualifying.