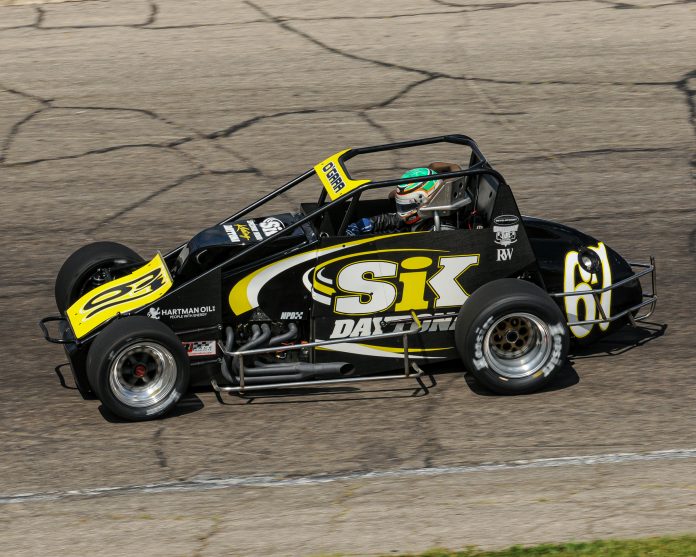 In the winter of 2017, Anderson Speedway came up with the mission of rejuvenating pavement non-wing sprint cars. As part of that plan more races were added to the 2018 schedule. For many years before that only two or three races were competed at Anderson Speedway. With the schedule expanding in 2018, many new teams acquired pavement sprint cars. One of those teams were SFH Racing Development with Kyle O’Gara as the driver.

The Indianapolis, Indiana driver has no shortage of driving experience. O’Gara started his racing career at the age of five racing go karts at Whiteland Raceway Park. He gained open-wheel experience making Indy Lights, USAC Midgets, USAC Silver Crown, and USSA Mel Kenyon Midget Series starts. O’Gara is one of the most decorated drivers in USSA history with 15 wins. Four of those wins came at Anderson Speedway. In 2018 the team turned their focus on non-wing pavement sprint car racing and specifically the Little 500.

“Competing in the Little 500 rose to the top of the (bucket) list for us,” explained Kyle O’Gara. “We were starting to get more serious on the dirt side, but a pavement sprint car became available over in Illinois. We knew that we couldn’t pass up the chance (in purchasing it).”

In addition in 2018 the team hired crew chief Brad Larsen. Larsen a native of California has been an Indy Car Engineer with Chip Ganassi, Fisher/Hartman Racing and Ed Carpenter Racing. Larsen was the 2012 recipient of the Clint Brawner Mechanical Excellence Award at the Indianapolis 500, when he was the chief engineer for Bryan Clauson. After the 2017 Indy Car season, Larsen came to work for Andy O’Gara and Sarah Fisher at SFH Racing Development.

“When we purchased the sprint car in Illinois, I had never worked on one before,” said Brad Larsen. “I talked with Bob East and I asked him a lot of questions. He would help me as much as he could without telling me everything.”

O’Gara made his first sprint car start at the 2018 Little 500. O’Gara finished in 24th position but earned rookie of the race honors. O’Gara made all five non-wing races in 2018 at Anderson. His best finish came during the August Thursday Night Sprint Race. The team finished 4th in the 125 Lap race. After completing the first season in a non-wing pavement sprint car, the team regrouped and focused on 2019.

“Every off season we focus on certain things we want to improve with our program,” explained Brad Larsen. “After the 2018 season we got rid of our cast iron 360 (engine). We upgraded to a much lighter 410 (engine).”

The team in 2019 competed in all of the non-wing races at Anderson Speedway in addition to the Auto Value Bumper to Bumper Sprint Car series. O’Gara showed great promise in an Auto Value race at Kalamazoo Speedway in Michigan. After starting in the third position he methodically worked his way to the lead. While leading the race with five laps to go he got stuck behind lap traffic and fell back to third. O’Gara’s best finish at Anderson came on UAW Night at the Races in August. He finished 5th in the race. The team continually picked up speed and improved over the races.

“I have never raced a pavement sprint car before 2018,” said O’Gara. “Experience has greatly helped us and focus on our long run car.”

“Almost every practice or test session we participate in, we our always at the top of laps completed. We are still new at this and trying to learn. We are competing against drivers like Santos, Swanson and Pierce who have been at this much longer.” explained Larsen.

The 2020 season was a banner year for O’Gara and the SFH Racing Development Team. He was able to achieve a career best 2nd place in the Glen Niebel Classic and a 4th place finish in the Little 500. Unfortunately, Kyle was forced to miss the remaining races in 2020 as he helped his family open the new Speedway Indoor Karting facility in Daytona, Florida.  The team’s success reached the top of the podium, this past February, as O’Gara scored his first win at Showtime Speedway in St. Petersburg, Florida.