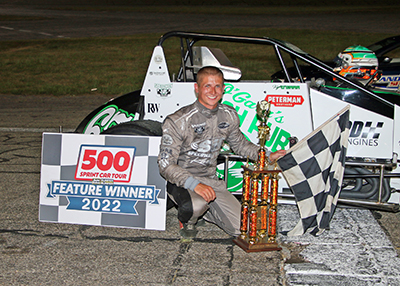 O’Gara took the lead on lap 11 and stayed in front of Bobby Santos III over the final 79 circuits for his first Sprint Car win on the high banked quarter-mile oval. O’Gara took home $4,000 for the victory presented by Auto Value and Bumper to Bumper part stores and a $5,000 race bonus from Perfect Stop Brake Pads was spread out through the remaining top eight.

Travis Welpott took the lead at the start following the inversion of the top ten qualifiers with fast qualifier Caleb Armstrong having to try and work through traffic. O’Gara started on the outside of the second row and on the opening lap moved into the second spot behind Welpott. On the 11th lap O’Gara moved inside of Welpott coming off the fourth turn to take the lead. Bobby Santos III passed Welpott ten laps later to move into the second position and would chase O’Gara the rest of the way.

The race was slowed on lap 26 when Welpott and Davey Hamilton Jr. tangled in the fourth corner while both were running in the top five. Three-time Little 500 champion Kody Swanson retired on lap 36 when his Doran Enterprises ride dropped a cylinder. At the mid-point it was O’Gara, Santos, Tyler Roahrig, Dakota Armstrong and Billy Wease in the top five with Caleb Armstrong sixth.

The race was red-flagged when Caleb Armstrong flipped in turn three on lap 98 while battling with Wease and Roahrig for the fourth position while contending with lapped traffic. Armstrong was not injured.

O’Gara retained the point on the final restart to win by .53-seconds over Santos, Dakoda Armstrong, Wease and Roahrig. “It’s nice to get a win at home,” O’Gara said of the victory in Indiana. “We’ve been lucky in the Sunshine State the past couple of years and waiting on this one back home. “So happy to get it checked off the list and hope it’s the first of many,” he said. “We had a very strong car.” O’Gara said qualifying eighth was good for the team and showed we had a good race car. “We had to pick our way through the first couple of cars,” he said. “I wanted to get to the point and control the race.”

Santos said he didn’t want to see an earlier stop to allow the teams to refuel because he thought the team had something to challenge O’Gara. “After that we weren’t quite as good,” he said. “We fought to get grip tonight, but it was fun.” Armstrong said the five cautions hurt the effort to contend for the win. “We were really good on long runs,” he said. “The track lacked grip and it was hard to pass.”