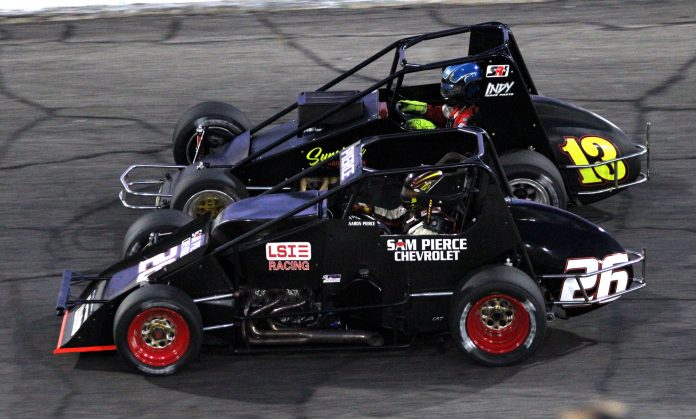 Anderson, Indiana (July 30, 2020) ….. Non-Wing Sprint Cars return to Anderson Speedway for this Saturday, August 1st for a big 125 Lap race. This will serve as the final tune-up before the 72nd Annual Pay Less Little 500 presented by UAW scheduled September 5. Tyler Roahrig (Plymouth, Indiana) was able to win the Glen Niebel Classic on July 11th.  Which was his third consecutive non-wing sprint car win at Anderson and fourth victory in the past three years. Roahrig will be facing some stiff competition if he wants to continue his winning streak.

Since the 125 lap non-wing races were introduced in 2018, only two other drivers have made it to victory lane. Those two drivers are track record holder Aaron Pierce (Yorktown, Indiana) and three-time Little 500 winner Kody Swanson (Kingsburg, California). Both drivers have entered Saturday’s race. Pierce missed the Glen Niebel Classic because of prior sports car racing commitments at Brainerd International Raceway in Minnesota. This Saturday will be Pierce’s first time on the fast Anderson bullring in 2020.

Kody Swanson has won back to back Little 500’s for Nolen Racing and has ran in every 125-lap race since they were introduced. The California native has qualified on the pole five of the eight races including the 2020 Glen Niebel Classic. However, Swanson has hit a rough patch at Anderson Speedway, but all eyes are focused on the next race and the Little 500.

“Not often lately have we had the chance to race at Anderson Speedway before the Little 500,” explained Kody Swanson. “It is a great opportunity to continue working to improve, and I’m looking forward to learning anything we can as we prepare for the Little 500. This Nolen Racing team is putting in the effort, and I’m hopeful we can get the results they deserve.”

Kyle O’Gara is no stranger to victory lane at Anderson Speedway from his time racing Mel Kenyon Midgets. O’Gara has been knocking on the door of doing the same in a non-wing sprint car. The SFH Development Team was able to finish second at the Glen Niebel Classic. The team qualified in the 16 position but was able to move up 14 spots. Bobby Santos III has also been on the cusp of winning on multiple occasions over the past three years. Santos III was unhappy with his third place finish a month ago and plans on making major changes before this Saturday’s race.

“We are really looking forward to this final race as a warm-up for the Little 500,” said Bobby Santos III. “We haven’t been great this year, so I’m looking at a fall Little 500 as a blessing. We just need to have a good run this weekend to get some momentum going into the Little 500.”

Other entrants include 2019 USAC Silver Crown rookie of the year, Derek Bischak. Shane Hollingsworth will be competing in the second Nolen Racing car. Hollingsworth has made 11 consecutive Little 500 starts for the team, with his best finish being third in 2011 & 2019. Johnny Gilbertson will be making the long haul from Tampa Florida for the 125-lap race.

Anderson Speedway is asking guest to wear a mask where you cannot keep a 6ft distance between your party and others. Please stay home if you are sick, have a fever, or otherwise display symptoms of COVID-19. In addition, as part of Indiana’s “Back on Track Plan” stage 4.5 we are limited to 50% capacity. Tickets will be for sale at the ticket windows only.