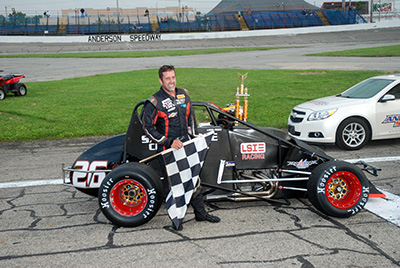 Veteran Aaron Pierce made a picture perfect crossover pass on lap 71 to take the lead from Justin Grant and score the victory. With a tightly bunched field track position was crucial on Sugar Fork Crossing night at Anderson Speedway.

Justin Grant took the lead on lap 47 after an incident with Travis Welpott. The front seven cars ran nose to tail until Pierce took the point, but had to turn back a challenge during the waning circuits in the 125 lap event. Bobby Santos got around Grant on lap 80 with Kody Swanson climbing from the fifth spot to third by lap 84 .Santos closed on Pierce but when the leaders encountered lap traffic in the last five circuits, he went high in the first turn. Pierce won by 1.8 seconds over Santos and Swanson. Welpott took advantage of the inversion following qualifying and led the first 46 laps before his night ended. From the start Welpott was chased by Justin Grant, Aaron Pierce, Jacob Wilson and Bobby Santos.

Tommy Kouns made it back to back feature wins in the K & M Tool and Die feature for the Mel Kenyon Midget Series. Kouns for the third time in 2019 set fast time during qualifications and after starting fourth took the lead on lap 3 with an inside pass of Ryan Huggler. Kouns was followed to the checkers by Kameron Gladdish and Colin Grissom.

Ricky Craig led all 30 laps to win his second consecutive Marcum’s Welding Front Wheel Drive feature race. He first had to turn back a challenge from Shane Reed and then Shane Cullen for the win. Cullen finished second only a half-second behind Craig with Reed settling for third.