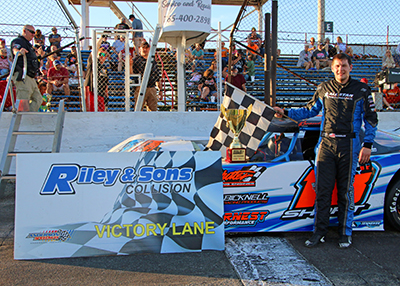 Michigan driver Steve Needles took advantage of two decisions by Lady Luck to win the Outlaw Late Model race CB Fabricating Night at the Races. During qualifying defending race winner Tyler Roahrig shattered the existing track record for the Reveal the Hammer Outlaw Late Models, five other drivers would eclipse the mark set in 2021. The invert put Needles on the front row and he jumped into the lead chased by Brock Ganus and Brandon Short. Tyler Roahrig who started sixth moved into the fifth spot at the start. Ganus spun on lap four and a lap later he drove into the infield with flames shooting from the back of his car, ending his night. On the restart Adam Terry used the outside groove to move from the fourth spot to second, but he was passed by Roahrig on lap 11. The running order remained unchanged until lap 35 when the car of Justin Holloway erupted in smoke bringing out the final caution. Reveal the Hammer officials elected to restart the race in single file, which was a benefit for Needles. Roahrig passed Terry on lap 37 and for the next 23 circuits looked high and low seeking away around Needles. At the finish Needles won by .635-seconds over Roahrig with Brandon Short coming home in third.

In only his third career start Thomas Schrage recorded his first feature victory with the Kenyon Midget Series. Starting on the front row Schrage took the lead from point leader Trey Osborne with Dameron Taylor moving into the second spot from the third starting spot. On the 11th circuit Taylor got trapped in the high groove and was passed by fast qualifier Jack Macenko, Osborne and Anderson Patterson. With Schrage opening a comfortable lead there was a lot of close racing behind the leader with drivers scambling for every position. Osborne claimed the second spot from Macenko on the 23rd lap when Macenko got high in the fourth corner, almost making contact with the outside retaining wall. Schrage went on to win by .955-seconds over Osborne with Macenko, Anderson Patterson and Kyle Ford rounding out the top five.