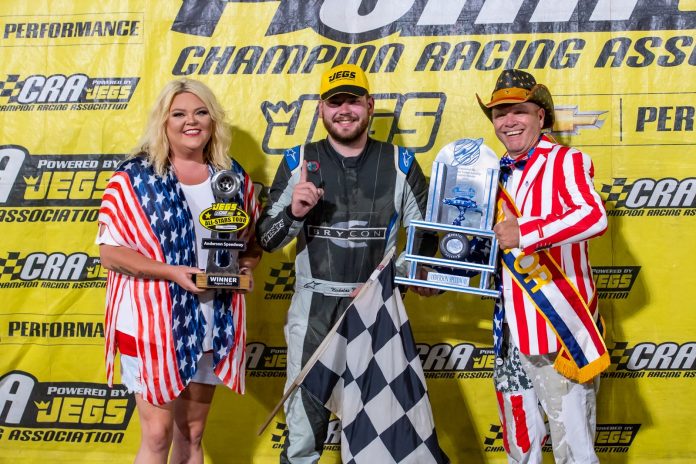 ANDERSON – Canadian driver Nicholas Naugle made the long trip to Anderson Speedway a worthwhile one.

Naugle took the lead of the Fudge Packer 100 for the CR JEGS All-Stars Tour feature Saturday with a pass of leader Brett Robinson on lap 58 and led the remainder of the way.

As a result of the inversion following qualifying Robinson started on the front row with Ethan Stadniczuk along side. Robinson took the lead and was followed by Stadniczuk for the first eight circuits.

Stadniczuk took the point on lap nine getting inside of Robinson on the back straight. Naugle started sixth and was still running in that position when the race was red-flagged on lap 20 because of lightning in the area.

On the restart Robinson reclaimed the lead from Stadniczuk with an outside pass entering turn three. Fast qualifier Dakota Stroup and Naugle both moved up two positions to second and third by lap 30.

The running order remained unchanged until the caution flag waved on lap 56 for an incident involving Jimmy Tucker and Nick Egan in turn two.

The caution flag would wave twice more before another la could be completed with Stroup dropping out of contention with an electrical problem.

Naugle won by 1.9-seconds over Robinson with Dylan Bates coming home third after passing Stadniczuk on lap 93 with Tucker recovering to finish fifth.

Nathan Greene took the lead at the start but was passed by Everidge on lap four with an inside move on the front straight.

Fast qualifier J.P. Crabtree worked his way up from the sixth position to take the lead from Everidge on lap 16 on the back straight.

The only caution flag waved when Rich Segvich made contact with the turn one wall, which set up a shoot-out between Crabtree and Everidge.

Everidge got the jump on the restart and passed Crabtree with an outside pass entering turn one.

He went on to win by 2.7-seconds over Crabtree with Kevin Gross coming home in third.

The Shirley driver took the lead from Randy Owen on lap 13 with a inside pass coming off the second corner and built up a comfortable lead.

The lone caution flag waved when second place running Ricky Craig and Jimmy Kirby got together on the back straight.

With his lead wiped out, McConnell was able to hold off Ron Phipps by .3-tenths of a second with Kirby coming home in third.