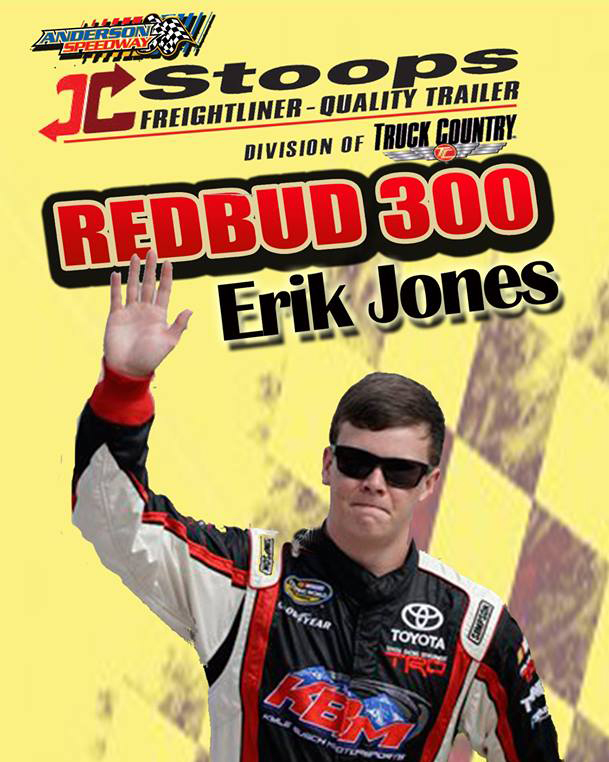 Fresh off a set of second place finishes in the NASCAR Camping World Truck Series and the NASCAR XFINITY Series, Erik Jones will be using a rare weekend off from his NASCAR schedule to return to the high bank quarter mile of Anderson Speedway for Saturday nights’ Stoops Freightliner Redbud 300.

The 19 year old from Byron, Michigan entered and won his first super late model race of the season one month ago at Berlin Raceway, during the first of three races in the Champion Racing Association’s (CRA) “Triple Crown”.

The Triple Crown represents the crown jewels of Mid-West Super Late Model racing. No driver has ever won the $100,000 bonus, which is achieved by winning the Berlin 251 at Berlin Raceway, the Redbud 300 at Anderson Speedway, and the Winchester 400 at Winchester Speedway, all in the same year.

This weekend Jones will be piloting his family owned No. 4 super late model, with a team compiled of members from his Kyle Busch Motorsports Camping World Truck Series team.

“I’m really looking forward to getting back in a super late model this weekend at Anderson Speedway in the CRA Super Series,” stated Jones. “Running Anderson Speedway in a super late model is very difficult. It takes a lot of patience to race side by side for 300 laps. Its exhausting yet exhilarating and I cannot wait to get back there. Late model racing is something I truly love and it would be very special to win all three races in the Triple Crown.”

Action at Anderson Speedway starts Friday with the JEGS All Stars Tour 100 and a 75-lap feature for the CRA Late Model Sportsman. Racing starts at 7:30 p.m.

The field for the Stoops Freightliner Redbud 300 will take the green flag at 7:30 p.m. on Saturday. Qualifying is set for 4:15 p.m. with an autograph session starting at 6 p.m.