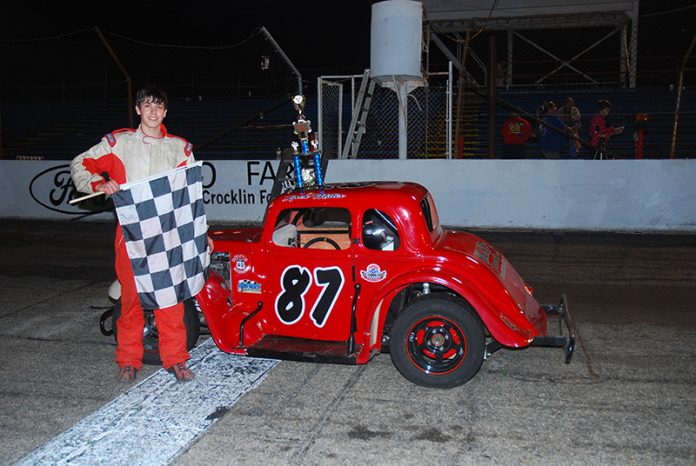 There were five drivers battling in a three-lap shoot-out to determine who would win the feature event for the Legends Division at Anderson Speedway.

When the dust had settled it turned out to be a family affair with Zack Miller edging out his brother, Ryan, and the rest of the top five by less than a second on Saturday.

Ryan Miller took the lead from John Robbins with an inside move down the back straight on the third circuit. But the lead was tenuous at best with the Miller brothers, Robbins, Josh Dietz and Doug Dugger all in a position to score the victory.

That set up the three-lap sprint to the finish with Ryan Miller getting inside of Dietz entering turn one and holding on to finish second. Robbins and Dugger rounded out the top five.

“There is a rivalry,” Zach Miller said of racing against his brother while celebrating in the AutoFarm McCrocklin Ford winner’s circle. “We both do a lot of work on the cars.”

Although Gerald Miller didn’t finish in the top five, his crew did an excellent job in getting the car back into competitive form after it rolled in the first heat race.
Adam Sturgill took the early lead in the heat race chased closely by Miller with Josh Dietz, Zack Miller and Dugger all tightening up the pack.

Coming off the fourth corner on the final lap, Gerald Miller got inside of Sturgill and the two made contact. The end result was Miller’s car rolling and coming to rest driver’s side down.

Neither driver was injured with Dietz being credited with the victory followed by Zack Miller, Dugger, Ryan Miller and Anthony Metallio.

There was plenty of excitement at the finish of the second heat race with Mark Dietzen slipping past Mike Carroll by .026-seconds at the checkers.

Carroll was chased the entire distance by Dietzen, who got a strong run coming off the final corner to record his first win of the year.