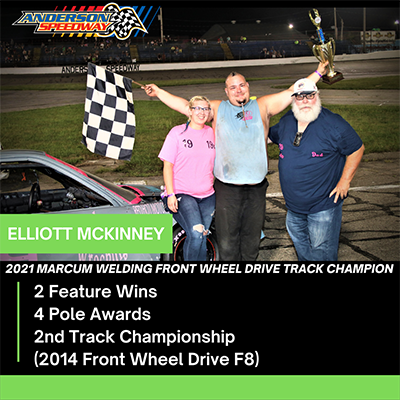 Veteran driver Elliott McKinney has watched championships elude him in the past, but was determined that would not be the case in 2021. McKinney closed out the Marcum’s Welding Front Wheel Drive season with two consecutive feature wins to add the oval title to the Figure-8 championship several years ago.

For the fourth time this year McKinney set fast time during qualifications and led all 25 laps. Behind McKinney there was a good battle for the second spot between Caleb Southerland and Chuck Cook. The only caution flag waved on lap 24 when the cars of Taylor Dock and Devin Lane tangled in turn two setting up a two-lap run to the checkers and wiping out a comfortable lead for McKinney. McKinney was able to maintain the point on the restart winning by .6-seconds over Cook with Southerland, Cody Griffith and Kamden Creek rounding out the top five.

“I’ve lost championships in the past,” McKinney said in the Riley & Son Victory Lane. “I worked on this car every night during the week so that this one wouldn’t slip away.” McKinney was one of six different winners in the division this year that included two by Donald VanValkenburg III, John Sage, Trey Baer and David Powell.