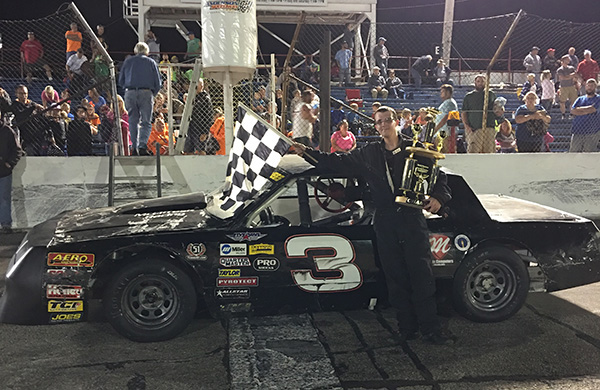 Elwood driver Jacob McElfresh found himself in the right place with four laps remaining to win the Norrick Petroleum Street Stock Showdown at Anderson Speedway.
McElfresh was running in third on Cintas Night at the Races on Saturday with Jimmy Kirby III and Brian Hopkins battling for the lead.
Kirby had led from lap 30 through lap 95 when Hopkins used a bump and run move entering turn three to take the lead. For several laps prior to that and on two restarts in the final laps Kirby and Hopkins were trading paint as the two driver raced side by side for the lead.
Hopkins only led the one lap when he spun in turn two following contact with Kirby, which put McElfresh on the point chased by Tony Stewart and since there were only four cars on the lead lap, Hopkins and Kirby.
On the restart McElfresh maintained the lead with Hopkins passing Stewart for second on the back straight and Kirby grabbing the third spot.
It was a tough night for some of the top contenders for the victory.
Helped by the inversion of the four fastest qualifiers McElfresh led the first 25 laps after starting on the pole position chased by Kirby, Andrew Teepe, fast qualifier Josh Poore and Hopkins.
Teepe took the lead from McElfresh on lap 26 with an inside pass on the back straight with Kirby, Poore and Ryan Amonnett racing in close formation for position.
The first caution flag waved when Andrew Cook spun in turn one and collected Teepe’s car, who retired with a broken brake caliper.
During the caution period Poore pitted because of a flat left front tire and lost several laps to the laders.
That put McElfresh on the point but Kirby took the lead on the restart entering turn one with Hopkins running third.
Poore was attempting to make his way back through the field when he made contact with Stewart’s car on the back straight, suffering a cut right front tire which caused him to bounce off the outside retaining wall in turn three.
Top Speed Modifieds
Greenfield’s Damon Breedlove used an inside pass of early leader Al Berry on the 11th circuit to win the Top Speed Modified Touring Series Battle of the Banks.
There was action on the first lap when fast qualifier Scotty Tomasik, starting eighth because of the invert, failed to make it through the first corner making contact with the outside retaining wall.
Berry led the first 11 laps with point leader Jonathan Martin moving into the third spot after starting seventh in the field.
Martin passed Berry on a restart at lap 30 with an inside move entering turn one, but was never able to close on Breedlove.
Berry finished third followed by Evan Foster and Jamie Sites.
Marcum Welding Front Wheel Drive
Ron Phipps win streak in Marcum Welding Front Wheel Drive competition came to an end at five, but it took a wild finish to prevent him from a sixth win.
Starting on the front row the early lead was taken by Jonathan Pitts chased by Phipps, Nick Warner, Ronnie Phipps and Bill Overshiner.
The caution flag waved on lap six when Warner and Ronnie Phipps exchanged some paint and were sent to the tail of the field.
Ron Phipps took the lead from Pitts with a strong restart on the front straight with Ronnie Phipps and Warner advancing toward the front.
Despite several attempts Pitts was not able to take the lead from Ron Phipps with Warner closing on the front running duo.
Coming off the final corner on the last lap Pitts and Phipps made contact which allowed Warner to sneak past for the victory. Ron Phipps drove through the infield grass to claim second followed by Pitts, Overshiner and Kamden Creek.