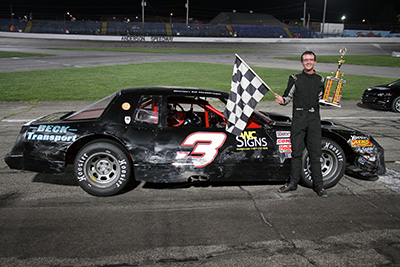 Two drivers looking for their first feature victory of the season battled to the final laps of the Street Stock feature with Jacob McElfresh claiming the win. McElfresh and defending Vore’s Steel Street Stock champion Josh Poore battled for the victory for the final 25 laps on Cintas Night at the Races Saturday.

Joe Muldoon of Fort Wayne took the point at the start chased by Elwood resident McElfresh with Poore running in the third spot. The driver on the move early in the race was fast qualifier Colby Lane who started sixth following the inversion and was running fourth after just two laps. McElfresh got inside of Muldoon on the back stretch on lap 9 and lap later Poore moved into the second spot with an inside pass entering turn three. Lane got inside of Muldoon on lap 11 entering turn three and the three-car battle for the victory started. For the next 24 laps Poore continuously looked to get inside of McElfresh entering turn three and exiting turn two. Several times Poore used his front bumper to tap McElfresh’s car, but the leader would not relinquish the preferred low groove. Lane closed and ran on the rear bumper of Poore’s car to the finish .As the checkered flag waved McElfresh won by .285-seconds over Poore. Lane finished a close third followed by Muldoon and Dawson Phillips. It was McElfresh’s first win at Anderson Speedway in a feature race since 2017.

Morristown’s Jeff Marcum became the first repeat winner in 2020 in the McGunegill Engine Performance Late Model feature. Through the first 13 laps of the race it appeared to be a repeat of an early contest between Ronnie Rose and Marcum. Rose set fast time during qualifications and took the lead from the start chased by Danny Adams and Marcum. Marcum moved into the second spot on lap 15 with an inside pass of Adams exiting the fourth corner and quickly closed to Rose’s rear bumper. For the next 12 laps the pair ran nose to tail until on lap 28 Rose’s car erupted in a plume of smoke ending his night. Marcum led the rest of the way finishing a second ahead of Adams followed by James Butler, Cory Adams and Mike Sargeant.