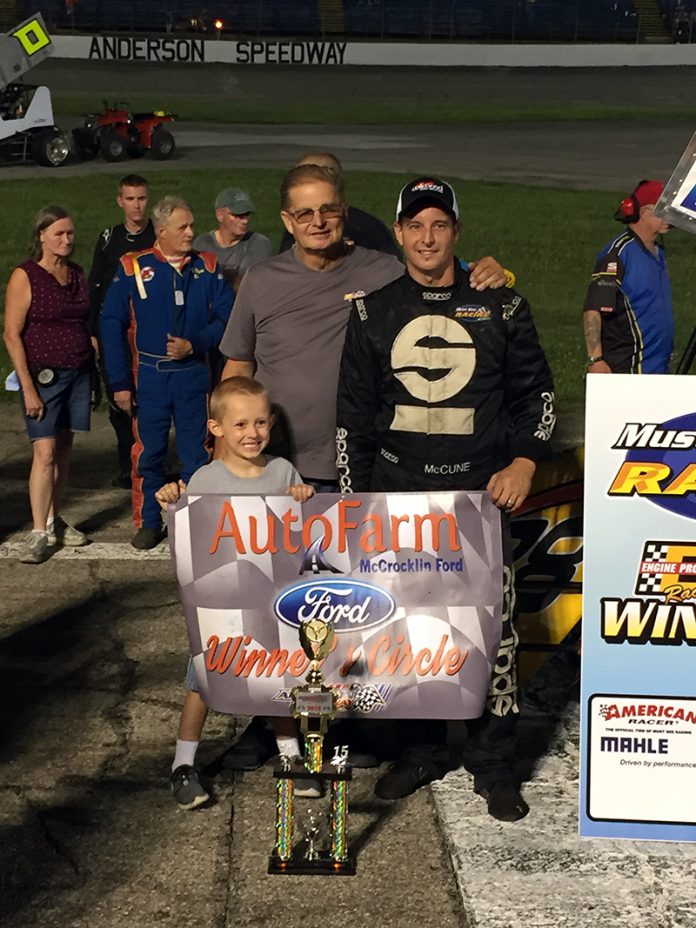 Ohio driver Jimmy McCune remained perfect in Must See Racing Winged Sprint action at Anderson Speedway regarding his second win of the season.

Veteran driver Jeff Bloom, a member of the National Sprint Car Hall of Fame, led the first eight laps before Grant Galloway moved to the point with an inside pass on the front straight.

McCune, who set fast time during qualifications, started sixth and moved around Bloom on the tenth circuit with an inside pass on the front straight.

For the next 20 laps McCune was looking for a way to get around Galloway with no luck, at one point attempting to make a move between two cars coming off the fourth corner.

On a restart on lap 31 McCune went to the outside and made the pass of Galloway coming off the fourth corner. From there McCune pulled away to win by nine-tenths of a second. Bloom came home in third followed by Brad Wyatt and Anthony McCune.

McCune will be looking to become the first three time winner at Anderson Speedway with the Must See Racing Series on Labor Day weekend.

Trent Gossar recorded his first ever win in Vores Compact Touring Series action by passing point leader Dan Irvine with an outside move on a restart with four laps remaining.

Irvine took the lead from Don Rutener on a lap 14 restart entering turn one. Irvine was being chased down by Adam Lee, who appeared to encounter a mechanical problem on lap 25 while closing the gap on Irvine.

John Robbins collected his sixth consecutive Thunder Roadsters feature win of the season by passing Rodney Oliver on the sixth lap and then held off Dave Osborn for the win.