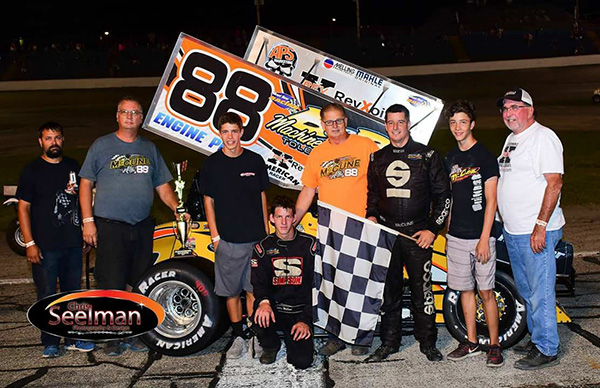 For the fifth time in his career Jimmy McCune scored the victory in the Must See Racing Winged Sprint feature at Anderson Speedway on Saturday.
McCune took the lead from Chris Neuenschwander with a cross over move exiting turn four on Intersect Night at the Races presented by AERCO Heating 7 Cooling. For the “Bulldog” it was McCune’s sixth win of 2017, and the 22nd of his career.
McCune set fast time during qualifying turning a lap of 10.7-seconds to best his nephew Anthony and Jerry Caryer, who turned in a season best performance.
With an inversion of four for the 50-lap feature that put New Haven’s Neuenschwander and Caryer on the front row with Neuenschwander getting the jump at the start. Caryer dropped back to fourth behind Anthony and Jimmy McCune with Fisher’s driver Brian Gerster running fifth.
With the leaders in slower traffic on lap 12 both McCune and Gerster got inside of Anthony McCune with an inside move entering turn three when the younger McCune drifted high in the corner.
Jimmy McCune closed on the rear nerf bar of Neuenschwander and as the two sliced through traffic it allowed McCune to take the lead.
The only caution flag of the night waved on lap 23 when Christian Koehler spun in turn two, following the restart Gerster passed Neuenschwander entering turn three and started to close of Jimmy McCune.
McCune was able to keep ahead of Gerster might picking the right moment to pass slower cars as Gerster was seeking his first winged sprint race win at Anderson Speedway.
Gerster could close on McCune but never get close enough to slip inside to make the pass and the “Bulldog” carved his way around the slower cars.
At the checkers it was Jimmy McCune, Gerster, Anthony McCune, Neuenschwander and Caryer. Indianapolis driver Dameron Taylor, the defending Mel Kenyon Midget Series champion finished ninth in his first effort in a winged sprint car.
Thunder Roadsters
Indianapolis driver Dave Osborn broke John Robbins winning streak at six in Thunder Roadster action. Robbins had been a perfect five for five in feature races this year.
Rodney Oliver took the early lead with Chad Cory, Osborn, Robbins and Marty Griffin in close pursuit.
After swapping the second spot for several laps Osborn moved into second on lap five and Robbins climbed into third on lap nine.
Both Osborn and Robbins slipped inside of Oliver on the 13th circuit when the leader got loose in turn two.
A lap leader the caution flag waved for debris and on the restart Osborn was able to maintain the lead to record his first feature win of the year. Cory, Oliver and Alexandria’s
Clayton Gaines rounded out the top five.
Late Models
Morristown’s Jeff Marcum for the third time this year swept through the Late Model competition setting fast time, winning the heat race and recording his fourth victory of the year.
Muncie’s Tyler Marsh took the lead at the start followed by Joe Woodring and Marcum. Marcum passed Woodring on the third lap with an inside pass entering turn three and on the next circuit made an identical move to take the lead.
Marcum was followed at the finish by Woodring, Marsh, Dustin Burge and Rich Segvich.
Legends
In the final tune-up before the running of the Grant Fritz/Greg Dietzen Memorial race for the Legends cars on Aug. 26 Zack Miller held off his brother Ryan to record the victory.
Helped by the inversion that put him on the pole position the Ohio driver jumped into the lead and opened up some distance on a pack of four cars battling for position.
Ryan Miller moved into the second spot on lap 14 with a pass of James Edsall III and started rapidly closing on his brother, Zack.
Caleb Heady, James Edsall III and Alan Edsall rounded out the top five.