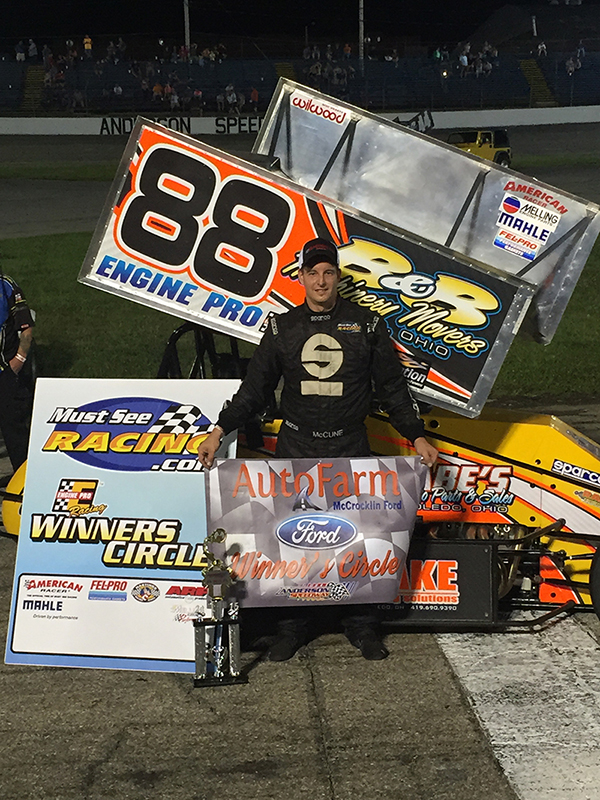 McCune was chased the entire distance by Grant Galloway who was always in striking distance of the leader, especially during the first half of the 50-lap feature as the two wove their way through lapped traffic.

McCune was almost caught up in the first caution when Sam Davis spun entering turn three and collected the fifth place car of Brian Vaughn. McCune was coming up to lap the fifth and sixth place running cars at the time.

Galloway had two more chances to pass McCune on Interstate Auto Auction restarts, but was never able to make a charge for the lead.

Dave Osborn scored his first win of the season in the Thunder Roadster division taking the lead from Marty Griffin on a restart with 12 laps remaining.

Griffin took the lead on the opening lap when point leader John Robbins drifted high in the second corner and fell back to the fourth spot.

With Griffin leading the way the top four corners were running in a tight pack with Osborn, Robbins and Doug Dugger battling for position.

Robbins passed Griffin for the second spot on lap 20 but finished six-tenths of a second behind Osborn. Dugger and Rodney Oliver rounded out the top five.

Jacob Garrigus inherited the lead in the World of Outlaw Figure-8 Series feature on the second lap when early leader Shawn Cullen spun in oil dumped by Jeff Swinford.

With Swinford’s car dumping oil on the track, Cullen spun at the entrance to turn three and backed into the outside retaining wall.

On the restart Garrigus got the jump on Mike Riddle Jr. and opened up a comfortable lead while Riddle battled with Michael Hadley and Jesse Tunny for the second spot.

Tunny passed Riddle for the second spot on lap 25 but was never able to close the gap on Garrigus. Riddle held on to finish third.