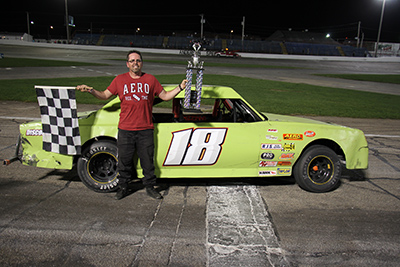 McConnell Captures ThunderCar 100; Brown, Cullen Get Feature Wins
Indianapolis driver David McConnell only led two laps of the 100-lap feature for Thunder Cars at Anderson Speedway but it was the two that mattered.
Dale Harper took the lead on lap 34 when leader Josh Garrr’s car spun in turn two and a fire broke out in the engine compartment.
With Harper opening a comfortable margin there was an intense battle for the next four positions by Josh Burton, McConnell, Frankie Oakes and Earl Adams II.
As the laps counted down it appeared that Harper was going to take home the $1,000 payday with only five circuits remaining.
The fifth caution flag waved on lap 98 when Alexandria driver Tyler DeHart spun in turn three while battling with Adams for the fifth position.
On the restart McConnell got an excellent jump on the outside line and was able to pass Harper for the lead entering turn one.
From there he was able to hold off Harper by .186-seconds for the victory with Oakes, Adams and DeHart rounding out the top five.
DeHart led the first two laps giving way to Garr on the back straight. Ronnie Rose, who dominated Thunder Car action all year at Anderson Speedway took the lead from Garr on lap 13 with a power move in the high line on the front straight.
But Rose’s night came to an end on lap 26 during the first caution lap with an apparent transmission leak. That put Garr back on the point until his woes on lap 34.
The Marcum Welding Front Wheel Drive season championship race wasn’t decided until there were three laps remaining.
Visiting Indianapolis Speedrome regulars Donald VanVelkenburg and Tylar Brown waged an intense battle for the top spot from the wave of the green flag.
VanVelkenburg was able to turn back several challenges by Brown who looked to the high groove and low line to take the point.
Brown’s opportunity came on lap 28 when he was able to thread the needle between VanVelkenburg and a lapped car coming off the fourth corner to take the lead for the first time.
VanVelkenburg attempted to take the lead back over the final two circuits but was unable to get inside of Brown.
Brown won by .27-seconds over VanVelkenburg with local driver Randy Owen coming home in third followed by Eli Haynes and Justin Medford.
This was Brown’s first ever appearance at Anderson Speedway.
Shawn Cullen led the entire distance to capture his fourth Hart’s Auto Figure feature win of 2018.
Curtis Chapman and Jerry Swinford Jr. rounded out the top three.