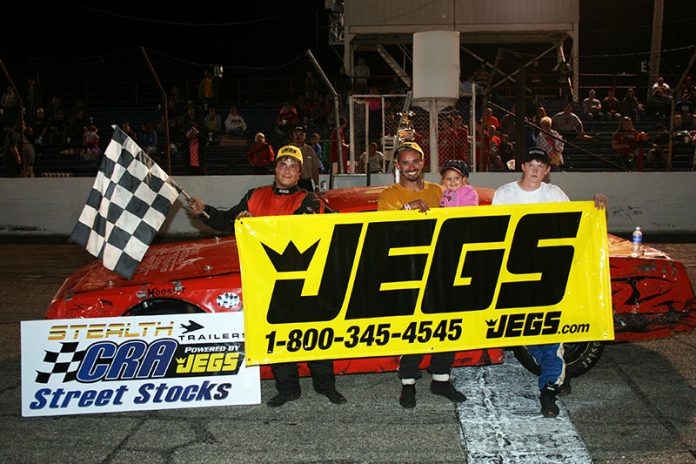 Marsh said he couldn’t get the handle on the car with new tires the team purchased, but a change of Hoosier tires proved to be the right move.

It was a good thing the team made the changes as Marsh grabbed the lead with 11 laps remaining and then survived three restarts to capture the feature at Anderson Speedway.

For almost 50 laps Jason Atkinson was dominating the race but suddenly slowed on lap 63, which propelled Marsh into the lead.

“I was focusing on my line,” Marsh said. “I didn’t know Jason (Atkinson) has a problem.  When the caution flag came out I looked at the scoreboard and saw we were leading.”

After taking the lead Marsh had to hold off Calvin Parham for his first career CRA win in the series final appearance of 2014 at Anderson Speedway.

Mason Keller brought out the fifth and final caution of the night when he rubbed fenders with Parham and suffered a flat tire while running third.

On the final restart fast qualifier James Kirby III was able to get inside of Parham coming off the second corner to claim the runner-up spot. Andrew Cook, Nick Warner and Phil Jenkins rounded out the top five.

Warner came back through the field to finish fourth after spinning on lap 21 after contact with Keller.

“I knew Calvin (Parham) would race me clean,” Marsh said of the final three restarts. “He was trying to get to the bottom of the track.”

“We’ve been working on this awhile,” he said of the victory in the Tim Thompson Nationwide Insurance Winner’s Circle. “We hope there are more to come.”

Atkinson inherited the lead when Dustin Burge crashed on lap 18.

Burge had a throttle stick and made hard contact with the turn one wall. He was looking for his second consecutive win at Anderson Speedway.

Burge took the lead from Andrew Cook on lap five with an inside move entering turn one in a three-way battle with Calvin Parham, who was passed by Marsh exiting turn two.

The race was slowed five times by caution flags and there were three lead changes among four drivers.