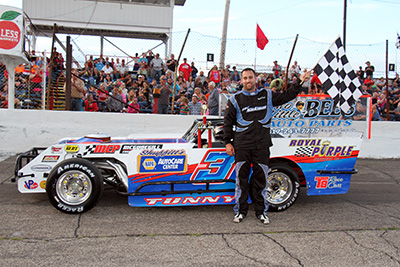 Indianapolis driver Mark Tunny made it two July 4th wins in the Outlaw Figure-8 feature at Anderson Speedway on Monday.
On Figure-8 Madness night presented by Star 106.9 and the Madison County Visitors Bureau, Mark Tunny took the lead at the start of the 50-lap feature chased by Ben Tunny.
Austin Tunny moved into the second spot on lap 20 with an inside pass of Ben Tunny on the front straight.
For the next 30 laps Austin Tunny stayed glued to the rear bumper of Mark Tunny and almost made the pass with two laps remaining with an inside move entering turn one.
The leader had to slow on the final time through the crossover when the car of Donnie Murphy II spun in the ‘x’.
Mark and Austin Tunny were followed by RJ Norton III, fast qualifier Jesse Tunny and Mike Riddle.
Riddle started tenth in the field and worked his way up to fourth with four laps remaining. He had to slow to miss Murphy’s car and finished fifth.
Marcum Welding Pro Compacts
After losing a plug wire while leading on Saturday, Matt Tharp scored the victory on Monday holding off Jeff Williams for the final 18 laps.
Tharp built up a comfortable lead on Saturday but with two laps remaining his car slowed dramatically and it allowed Williams to record the victory.
Kyle Keely took the lead on Monday chased by Tharp and Williams for the first 11 circuits.
On the 12th lap Keely went high in turn four which allowed Tharp and Williams to slip into the top two positions.
Tharp won by .4-seconds over Williams followed by Keely, Ron Phipps and Kyle Allmond.
Front Wheel Drive Figure-8
Mike Alley recorded the victory in the first appearance of the season for the Front Wheel Drive Figure-8 division when the two leaders tangled on the penultimate lap.
Cody Mulryan led the first seven circuits but was black-flagged for turning laps faster than his qualifying time. That put Nick Warner on the point chased by fast qualifier Kyle Bryd.
Byrd stayed locked on Warner’s rear bumper and took the lead on lap 13 with an inside move entering turn one. At the two leaders battled coming to the white flag, Warner and Byrd got together.
Byrd came to a stop on the front straight retaining wall, with Alley and McKinney driving into the top two spots.
Warner came home in third followed by Mulryan and Byrd.
Hart’s Figure-8
Shawn Cullen saw a big lead wiped out by a caution flag near the halfway point for the Hart’s Auto Figure-8 division but went on to record his second win of the season.
Cullen pulled away from defending champion Jeff Swinford over the final 15 laps and was never seriously challenged for the lead.
Swinford finished second followed by Nick Warner and Bruce McFall.