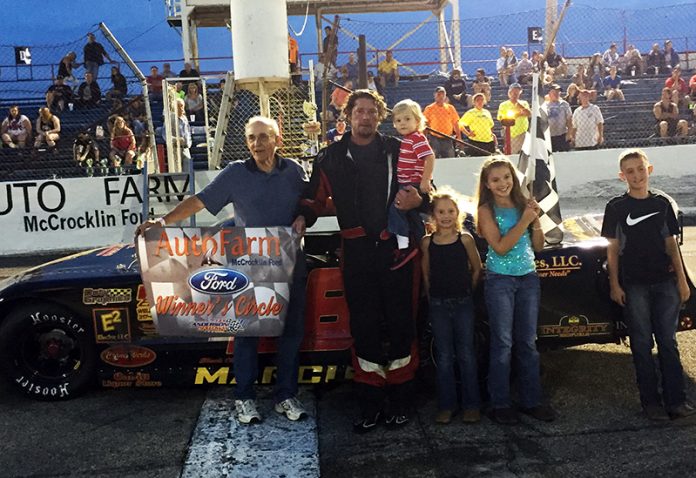 For 35 laps no driver was able to pull away to a clear advantage at Anderson Speedway on Saturday in the McGunegill Engine Performance Late Model race won by Jeff Marcum.

Rob Allman led the first 28 laps chased first by Ronnie Rose and then Jack Dossey III as the top seven drivers raced in a tight formation.

Following an Interstate Auto Auction restart on lap 25 Allman was running fender to fender with Dossey for the lead when three laps later his engine expired. At the same time Marcum was able to slip inside of Dossey in turn three.

When the race resumed Marcum was able to maintain the lead by racing in the low groove with Danny Trent able to get inside of Dossey with six laps remaining entering turn three.

Trent pressed Marcum to the finish and made a final attempt to grab the lead coming off the final corner but came up one-tenth of a second short.

Marsh took the lead from the outside pole position with Fred Hopkins, Andrew Cook, Poore and Willie DeHart running in a tight formation.

For the next 24 laps Marsh maintained the low line while Cook and Poore battled for the second spot. On lap 24 Cook spun which set up the only restart of the race.

Poore took advantage of the opportunity to use the high line to get around Marsh in turn one. Marsh held on for second followed by DeHart, Cook and Hopkins.

John Robbins used an inside pass of Brad Kendle on the eighth lap of the Thunder Roadsters feature to record his fourth win of the year.

Fast qualifier Dave Osborn finished second when Kendle spun on the back straight with Marty Grffin, Mark Dietzen and Rodney Oliver rounding out the top five.

Jeff Swinford led 23 of the 25 laps to record his fourth Harts Auto Center Figure-8 feature of the year.

Swinford was able to us the outside lane to make the pass of Bruce McFall coming off the second corner. It was a stellar night for Swinford who set quick time and won the heat race.