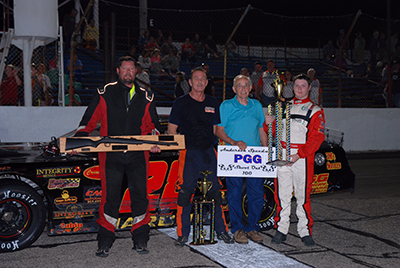 Morristown’s Jeff Marcum turned in one of the most dominating performances of his career in winning the PGG 100 at Anderson Speedway. Marcum, a three-time McGunegill Engine Performance champion, led the final 81 laps on Saturday on Drive Sober Night presented by the Indiana Criminal Justice Institute to record his fourth feature win of 2019.

Nathan Greene and Ronnie Rose started on the front row after the top four qualifiers were inverted with Rose immediately taking the point with Marcum, who started fourth in tow. With Marcum glued to his rear bumper Rose continued to lead with Zachary Tinkle running in third. On the 20th circuit Rose slowed with an apparent overheating problem surrendering the lead to Marcum. From there Marcum built-up a comfortable lead over Tinkle and Greene, that was wiped out by a caution for a spin by Kevin Gross Sr. on lap 43. After a series of caution flags for spins the race went the final 48 laps without another yellow flag. Marcum won by 11.3-seconds over Tinkle with R.J. Norton Jr. rounding out the top three.

The outcome of the VROA Modified feature was determined by a caution flag on lap 16 which gave Tom Boorsma the victory. The top 11 cars in qualifying were inverted for the start with fast qualifier Ryan Boorsma and his dad, Tom, mired deep in the field. Terry Bryne took advantage of the inversion and opened a sizeable margin while Cody Linn, Ken Quimby, Brian Beukema and Gary Storm battled for position. Tom Boorsma cracked the top five on lap 12 with Ryan looking for a way through the field and lapped traffic. On lap 16 Ryan Boorsma made contact with Storm in traffic and slammed into the turn one retaining wall. That did away with Bryne’s lead and placed Linn and Tom Boorsma on his tailpipe. On the restart Boorsma got underneath Linn in turn one to claim the second spot and three laps later he made the decisive pass on the back straight. Byrne and Storm finished second and third.

In the Hart’s Auto feature Warner took the point from early leader Mike Phipps with an inside pass entering turn one.