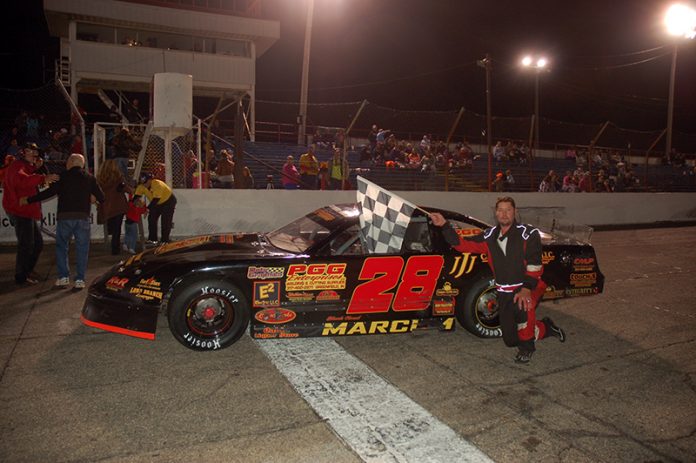 He emerged from the pass with the right front fender rubbing on the tire, spewing a trail of smoke for several laps. But following a caution period on lap 22, the tire rub seemed to have corrected itself after Marcum made slight contact with Russell.

On the final lap Russell spun when the lapped cars of Walter Thomas III and Phil Arnold got together in turn one. The incident cost Russell a solid second place run and he finished sixth.

For Marcum it was his third feature win of the season. He was followed to the checkers by point leader Jack Dossey III, Jason Neal, Joe Woodring and David Clark.

John Robbins took advantage of a restart on lap 8 to use the high groove entering turn one to pass Gerad Miller and return to the AutoFarm McCrocklin Ford Winner’s Circle for the second time in Legends Division competition.

Josh Poore, making his first start in the division, led the first six laps before being passed by Miller with an outside move on the front straight.

Following Robbins to the finish were Miller, Adam Sturgill, Gregory Rudzik and Poore.

Jeff Swinford continued his dominance in the Harts Auto Figure-8 Division with his eighth win in nine feature races in 2015.

Swinford led all 25 laps to record the victory, his seventh in a row, pulling away handily from second place running Nick Warner.

Brian Cherry used the draft to his advantage to pass RC Rigdon on lap 16 and then was able to hold on at the checkers to win the Indy Fascarts feature by one-tenth of a second.