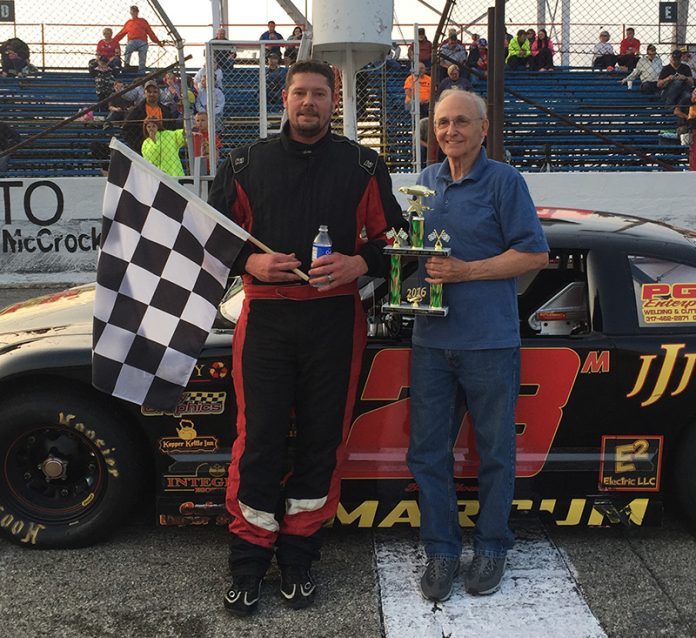 Morristown’s Jeff Marcum scored his third late model win of the year on Saturday at Anderson Speedway having to work his way through the field.
On Murat Shrine Night at the Races on Saturday Marcum was running sixth after ten laps of the McGunegill Engine Performance Late Model feature.
David Clark opened a comfortable lead at the start with the top five positions getting shuffled about between six drivers.
Marcum, the fast qualifier on the night, moved into the fifth spot on lap ten with a pass of Joe Woodring while Tyler Marsh was closing on Clark’s car for the top spot.
Clark’s run at the front, the best of the year for the Muncie driver, ended on lap 17 when he got bumped by Marsh and spun on the back straight.
That put Marsh on the point chased by a rapidly closing Marcum and Woodring.
Marcum made the pass for the lead on lap 26 with an inside moved on Marsh entering turn three.
Following Marcum to the checkers was Marsh, Woodring, Brian Morrow and RJ Norton Jr., making his first career start in a late model.
Kenyon Midgets
Ohio teenager Trey Osborne had a night he won’t forgot at Anderson Speedway scoring his first career feature win with the Kenyon Midgets.
Osborne set fast time during qualifications and started in the feature sixth following the invert.
Logan Huggler grabbed the lead at the start chased by brother, Ryan, Osborne, Tommy Kouns and Alexandria’s Clayton Gaines.
By the third circuit Osborne was in the lead with Ryan Huggler glued to his rear bumper.
For the remaining 27 laps Huggler kept the pressure on Osborne, several times giving the leader a nudge in the corner.
Following the second caution period when point leader Dameron Taylor spun, Gaines used the outside groove to move around Logan Huggler and started closing on the leaders. Gaines attempted to gain a second win at Anderson Speedway but could never get around Ryan Huggler.
Osborne won by a half-second over Ryan Huggler with Gaines, Logan Huggler and Kouns rounding out the top five.
Vores Compact Touring Series
Richmond’s Chris Jennings took advantage of an Ivy Tech restart with ten laps remaining to win the second Vores Compact Touring Series appearance of the year be beating Kevin Harmon to the checkers.
Harmon led from the start of the race with Chris Jennings and his cousin, Andy, moving into the second and third spots at the halfway point.
Although Chris Jennings could close on the rear bumper of Harmon’s car he was never able to get far enough on the inside or outside to complete the pass.
When the third caution flag waved for a spin by Kevin Keely, Jennings got a great restart to take the lead with an outside pass entering turn one with ten circuits remaining.
But the final caution flag waved on lap 28 when Kyle Allmond spun in turn four setting up a green-white-checker finish.
Starting on the pole position Jennings was able to maintain the lead beating Harmon to the checkers by less than a half-second with Ryan Clayborn, Andy Jennings and Nick Warner rounding out the top five.
VROA
Tom Boorsman made it three wins in a row at Anderson Speedway in Vintage Racing Organization of American Modified action.
Boorsman slipped inside Don Deyman with four laps remaining entering turn three to record the victory.
Deyman finished second followed by Shawn Simon, Rob Parker and Randy Pierson.