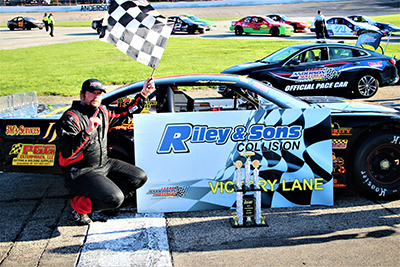 Muncie’s Buddy Davis took the early lead Saturday, thanks to an invert of the top six qualifiers. Davis was chased by Jim Crabtree Jr. making his first start in seven years and Marcum. The first of five cautions flags waved on lap 14 when James Butler spun on the front straight. The restart would impact the outcome of the race. On the restart Davis, Crabtree and Marcum went three-wide into the third turn with Marcum racing on the flat of the track surface and emerging as the leader.

By lap 20 fast qualifier Chris Shannon had climbed from the sixth spot to be running second behind Marcum with JP Crabtree, who started on the tail of the field knocking to crack the top five. Marcum would maintain the lead through four more restarts holding off Shannon and JP Crabtree. Shannon’s strong run would end on lap 70 when the car of Kevin Gross spun in turn two with Logan Huckeba spinning and collecting Shannon’s car against the outside retaining wall.

“We had a Buddy Davis sandwich there for a minute,” Marcum said in the Riley & Sons Victory Lane. “I don’t know how anybody made it out of there in one piece.” Marcum said when you’re out front and it gets late in the race you know there will be caution periods.

Anderson driver Josh Poore started his 49th career Street Stock win at Anderson Speedway in the CRA Street Stock portion of the Spring Fling. Taking advantage of the invert Poore started from the outside of the front row and would go on to lead all 75-laps.

While Poore was dominant, there was a good battle for the second spot among Dawson Phillips, Andrew Teepe, Jason Atkinson, James Kirby III and fast qualifier Dalton Connor. Teepe ran second to Poore throughout the race but was challenged by the other drivers throughout the event. Third place went to Kirby followed by Blaine Akin and Atkinson.

Atkinson had won four of the past five CRA Street Stock races at Anderson. “It seems like forever since I’ve won,” Poore said in victory lane. “Someone had to beat the 73 (Atkinson), why not me?” Poore said he didn’t like the six caution periods because he knew Teepe and Atkinson would have fast cars.

Richmond’s Chris Jennings made it three wins in a row at the start of the Vore’s Compact Touring Series Seasons, with a pass for the victory in the final corner of the last lap. Karter Stark took the lead on the 13th lap from his father, Kyle, with Jennings the fast qualifier mired in the back of the pack. From lap 17 to the finish Jennings gained five positions with the pass for the victory added by lapped traffic. On the final lap Karter Stark went high in turn three to get around a slower car. When Stark was forced up the track it allowed Jennings to drive underneath on the final corner and record the victory. Kyle Frame finished second followed by Karter Stark, Kyle Stark and Bo Hoelsher.

T.J. Fannin won the D & J Sales B4 Series feature leading from start to finish with Bradley Winters and Nicholas Meade rounding out the top three.