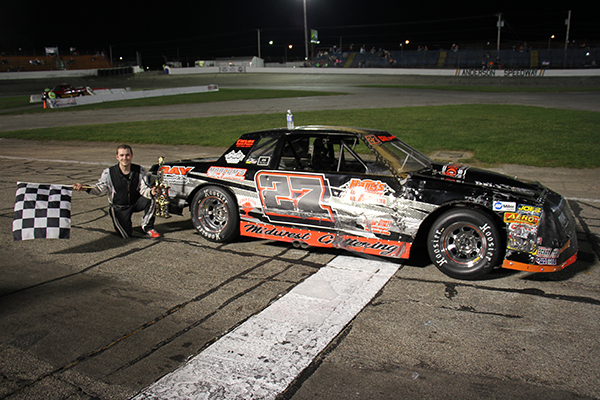 Defending late model champion Jeff Marcum scored his fifth feature win of the season, but it was a victory that didn’t come easily at Anderson Speedway on Saturday.
Marcum set fast time during qualifying and started fourth following the inversion for the feature race which put Alexandria’s Kent Baledge and Anderson’s Dustin Burge on the front row.
Baledge, looking for his second feature win of 2017, jumped into the lead chased by the tightly bunched group of Burge, Danny Trent and Marcum.
Burge running on the outside battled with both Trent and Marcum before surrendering the second spot and dropped back to fourth with the quartet still running in close quarters.
Trent got inside of Baledge on lap 11 coming off the fourth corner with Marcum claiming the second spot two laps later with an inside pass on the front straight.
For the next six laps Marcum was glued to the rear bumper of Trent’s car looking to make an inside pass for the lead. That opportunity came on lap 19 entering turn one. A lap later the only caution flag waved when Baledge suffered a flat right front tire and made slight contact with the outside retaining wall on the front straight.
Marcum survived the restart to claim the win followed by Trent, Burge, Joe Woodring and Rich Segvich.
Street Stocks
Anderson’s Josh Poore claimed his sixth feature win of the season aided by a caution flag that allowed him to get the jump on Elwood’s Jacob McElfresh.
For the second consecutive week Poore established a new track record for the division turning a lap at 13.664-seconds.
McElfresh, Poore and Anderson’s Andrew Cook ran tightly bunched for the first 15 laps as Poore and Cook played a waiting game for someone to make a mistake.
The first caution flag waved when Frankton’s Dalton Wisemiller spun in turn four. On the restart Poore was able to use the high groove to pass McElfresh for the lead.
The race was halted on lap 25 when Nick Kronenberg made hard contact with the turn three retaining wall while running fourth.
Poore retained the lead with Cook making an outside pass of McElfresh to claim the second spot. Wisemiller finished fourth followed by Camdon Creek.
Marcum Welding Front Wheel Drives
Anderson’s Ron Phipps recorded his seventh feature win of the season in Marcum Welding Front Wheel Drive action when both Randy Owen and Creek were black-flagged for turning laps quicker than their qualifying times.
Owen and Creek pulled away from the remainder of the field but consistently were running faster times than their qualifying effort.
That resulted in Phipps gaining the point chased by Nick Warner and Bill Overshiner.
At the finish it was Phipps, Owen, Warner, Creek and Overshiner,
In other racing action Bill Gerrick scored the win in Indy Fastcarts action after early contenders Kenny Raney, Kody Kennedy and Manny Aguilar tangled on the back straight.
Gerrick squeaked pass Dave Drinkard for the win with Kyle Downey coming home in third.