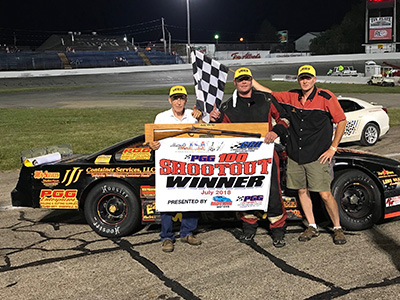 Morristown’s Jeff Marcum remained perfect in late model racing at Anderson Speedway this season with a win in the PGG 100 on Saturday.
Marcum, who waited several years to win a Champion Racing Association Sportsman Late Model race, has now recorded back to back wins in the Triple Crown.
As a result of the inversion following qualifications Marcum started on the front row along with Dustin Burge. Eddie VanMeter and fast qualifier Tony Dager lined up on the second row.
Marcum got the jump on the start with VanMeter moving into the second spot with an inside pass of Burge on the front straight before two circuits were completed. For the next 98 laps VanMeter would look for a way to get around Marcum to take the lead.
Marcum was able to maintain the lead through three restarts with VanMeter able to keep pace on the outside for several laps before dropping back into the second spot.
There were several times when VanMeter could get right on the rear bumper of Marcum’s car but was never able to complete the pass.
Marcum went on to win by 1.1 seconds over VanMeter with JP Crabtree, Ronnie Rose and Brandon Varney rounding out the top five.
It was Marcum’s sixth consecutive win on the high banked quarter-mile oval.
Crabtree took the third spot from Rose following a restart on lap 75 after the two drivers ran most of the night in the top five.
Tony Brutti drove to a sixth place finish after starting 20th in the field and having to start from the tail following an incident on lap six with Tony Brunke.
Ohio driver Zach Miller returned to victory lane at Anderson Speedway by getting inside of early leader Caleb Heady on the back straight with 20 laps remaining and leading to the finish.
Heady came home in second followed by James Edsall III, Alan Edsall and Mark Dietzen.
Dave Osborn recorded his second consecutive victory and third of the season by leading from start to finish in the Thunder Roadster feature.
Jed Cotterman closed on Osborn in the waning laps but came up 4-tenths of a second short of taking the lead. Rodney Oliver, Chad Cory and Gregg Cory rounded out the top five.