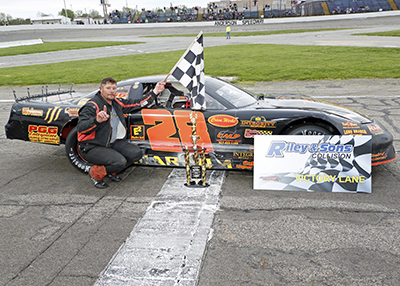 With his crew providing the best race car of the year Morristown’s Jeff Marcum scored his second McGunegill Engine Performance Late Model feature victory at Anderson Speedway. Marcum set fast time during qualifying Saturday on Byrider Spring Championships with last week’s race winner Ronnie Rose just a tick of the clock slower. Marcum jumped into the lead from the pole position over Rose with Cassten Everidge, Danny Trent and Jeff Whaley II running in a tight pack. By the time the first caution flag waved on lap six for debris, Trent had moved into the third spot with an inside pass of Everidge on the front straight. On the restart Rose was able to hang with Marcum running the high groove but eventually had to fall back into line. Trent used slower traffic to pass on the front straight on the 19th of 40 circuits. Although Trent finished second, he was moved back to fourth following post-race inspection with Rose credited with a second place finish and Everidge coming home in third.

For the third time this season Jimmy Kirby sent fast time for the ThunderCar division and took home the feature race. Unlike in the previous two races for the division this year, Kirby was chased by defending champion Ron Phipps and Rose. Rose ran second to Kirby for the first 32 laps when he was forced to retire with a mechanical problem. Phipps finished second 1-second behind Kirby followed by Michael Phipps, Earl Adams and Dennis Hayes. Kirby’s car was trailing puffs of smoke over the final few laps, he attributed to the need for a new water pump.

The rain shower that shortened the racing program proved to be advantageous for Marcum’s Front Wheel Drive competitor Donald VanValkenburg III. VanValkenburg set fast time and took the lead at the start with Elliott McKinney and Ricky Craig close behind. The caution flag waved on lap 19 and just before the restart the Indianapolis driver pulled into the infield with an overheating race car. When racing was terminated it was determined that VanValkenburg was the feature winner because 18 of the 25 laps were completed. Craig was scored second followed by McKinney, Chris Gray and Nick Warner.

John Robbins won the first Legends feature of the year with Xavier King and Austin Evans rounding out the top three.