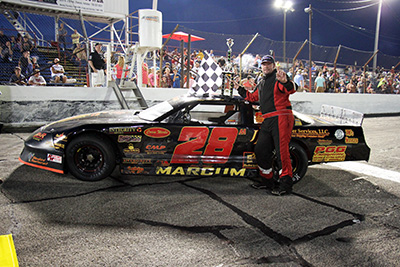 After not winning a Champion Racing Association Sportsman Late Model race prior to this year, Jeff Marcum has now won three in a row.
Marcum continued his dominance of Sportsman Late Model competition at Anderson Speedway with his seventh consecutive feature win on Edgewater Waters Alzheimer Awareness Night on Saturday.
After setting fast time during qualifications, Marcum started fifth following the invert which put Dustin Burge and Tony Brutti on the front row.
Burge took the lead at the start chased by Brutti, Brandon Varney, Ronnie Rose and Marcum.
The first of five caution flags waved on lap 17 for a spin by Joe Beaver in the second corner and on the restart Varney passed Brutti for the second spot with Marcum getting around Rose.
The caution flag waved after one lap for an incident in turn two involving Zachary Tinkle and Buddy Davis, with both drivers able to continue.
The running order remained unchanged when Rich Segvich got loose coming off the fourth corner on the 37th circuit and made contact with a safety barrier on the inside of the track.
Following the restart Marcum passed Brutti for the third spot using the outside line on the front straight. He used the outside groove on lap 48 to pass Varney on the back straight and then took the lead from Burge on the front straight.
A caution flag on lap 66 caused when Burge spun on the back straight wiped out Marcum’s lead and on a final caution came on lap 72 when Rose spun on the back straight.
On both final restarts Brutti tried to use the high line to made the pass for the lead but was never able to clear Marcum’s Chevrolet.
Marcum went on to win by .683-seconds over Brutti with Billy Hutson, Burge and KC Spillers rounding out the top five.
National Crown
Shawn Cullen became the sixth driver in the 69 year history of the National Crown to record back-to-back wins.
Cullen led all 50 laps and was able to open a comfortable lead early in the race as Nick Warner, Curtis Chapman, Josh Tharp and Kyle Allmond  battled for the second spot.
Chapman’s night ended on lap 36 with a transmission problem and Warner was slowed with a fuel pump problem.
Allmond came home in second followed by Tharp, Warner and Bruce McFall.
Jeff Williams set fast time and then went on to win the heat and feature race for the Marcum’s Welding Front Wheel Drive Division.
Williams took the lead from Randy Owen with an inside pass going down the back straight on the fifth circuit and steadily pulled away.
It snapped a five race winning streak for Owen who settled for second place followed by Jerry Loy.
Chicago driver Connor Kosowski picked up the win in CRS Mini Cups with Jamie Domski and Mike Mucha rounding out the top three.