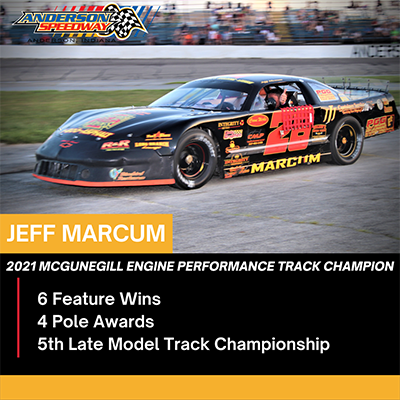 For the fifth time in his career Jeff Marcum was crowned the Late Model champion at Anderson Speedway. Jeff Marcum defended his 2020 title in the McGunegill Engine Performance Late Model division scoring six feature wins during the year. The Morristown driver picked up the $1,500 payday from sponsor 1,000 Degree Wood Fired Pizza Saturday on Season Championship Night presented by Cintas.

Fort Wayne’s Billy Hutson, a two-time winner at Anderson Speedway this year, set fast time during qualifications with Marcum on the outside of the front row. Hutson took the lead at the start with Marcum running in his tire tracks followed by Cassten Everidge, Jeff Whaley II and Buddy Davis. The running order remained unchanged until Hutson slowed on lap 21 with a mechanical problem giving the point to Marcum. Muncie’s Buddy Davis passed Whaley with an outside move on a lap 26 restart coming off the second corner.

Marcum won by 2.2-seconds over Everidge, Davis, Whaley and Kevin Gross Sr. “This championship is as sweet as the first,” Marcum said in the Riley & Sons Victory Lane. “The crew has given me a great race car all year. I hated to see Billy (Hutson) have a problem,” he said. “He’s always fast at Anderson and is a tough competitor.”