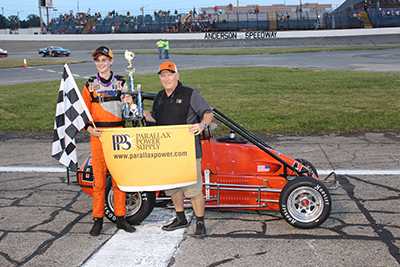 Jeff Marcum and Travis Burge kept their perfect seasons intact at Anderson Speedway Saturday in late model and street stock action.
Both drivers improved to three victories in three feature races on Military Appreciation Night presented by Double T Leather, but they had to work for the wins.
Marcum showed lots of patience in the early stages of the McGunefill Engine Performance Late Model 75-lap event.
Dustin Burge took the lead from the pole position chased by Ronnie Rose, Marcum, Danny Trent and Kent Baledge. After looking high and low Marcum from Morristown was able to use the outside groove to pass Rose for the second spot.
With Marcum in pursuit of Burge the battle developed between Rose, Trent, and Baledge for the third spot. At one point Trent got into the back of Rose’s car and suffered damage to the right front.
On lap 39 Marcum used lapped traffic and the high line to pass Burge for the lead and went on to win by 4.3-seconds over Baledge after Burge’s night ended on lap 56 with an ignition problem.
Chris Shannon, Rich Segvich and Rose rounded out the top five.
The Vore’s Welding & Steel Street Stock feature was stopped twice when cars made contact with the outside retaining wall but it was Travis Burge leading the entire distance for his third win of the season.
Burge at first had to hold off Elwood’s Jacob McElfresh and then Anderson’s Shawn Cullen for the top spot.
The first caution flag waved on lap ten when Larry Greene spun on the front straight and not another lap would be completed before the first red flag waved.
With Cullen trying to make a pass for the lead on the inside going down the back straight, he was forced low by Burge. As he came back up the track it caused a bottle neck and three wide racing entering the third corner.
Frankton’s Dalton Weismiller faced with no racing room went nose first into the turn three tire barrier and then was hit from behind by the car of Berry Jackson Weismiller was uninjured but his night was done.
Seven laps later McElfresh and James Kirby tangled on the back straight with both drivers suffering flat tires. Kirby ended up against the turn four water barrels, bringing out the second red flag.
From there Burge went on to the victory followed by Greene, Joe Pulley, Cullen and Jackson.
Ohio driver Trey Osborne led the entire distance to win the Parallax Power Supply for the K&M Tool & Die Mel Kenyon Midget Series holding off fast qualifier Kameron Gladish at the finish by .034-seconds.
It was one of the closest finishes in series history at Anderson Speedway.
Gladish didn’t move into the second position until there was two laps remaining after passing Ryan Huggler.
Coming off the fourth corner on the final lap Gladish made a charge that came up just short. Ryan and Logan Huggler finished third and fourth with Tommy Kouns coming home in fifth.
Randy Owen won his fourth consecutive Marcum’s Welding Front Wheel Drive feature leading the entire 20 laps and was never seriously challenged Brian McKinney and Devin Lane rounded out the top three.