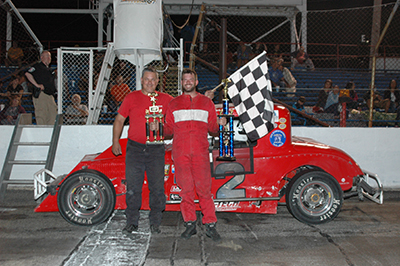 Three things had to fall into place for Ryan Boorsma to win the Vintage Modified feature at Anderson Speedway, all three did for him to claim the victory.
While Ryan Boorsma was experiencing all the breaks, Lady Luck refused to smile on Jason Burrus.
Burrus took over the lead from Gary Storm on the seven lap of the Saturday feature with an outside pass on the front straight. With Storm, Ryan and Tom Boorsma and Randy Pierson battling for second that’s when Burrus luck started to fade.
After opening up a comfortable lead the caution flag waved on lap 15 when Brian Beukema spun in turn two after Tom Boorsma car dropped fluids around the high banked oval.
The caution flag wiped out Burrus’s lead and eliminated Tom Boorsma from competition, Boorsma is a five-time winner in the division at Anderson Speedway.
With Burrus being challenged by Ryan Boorsma for the lead following the restart it appeared Burrus was going to keep the top spot. But with one lap remaining Burrus tangled with the lapped car of Don Smith setting up a two-lap shoot-out.
Ryan Boorsma powered around Burrus on the restart entering turn one and went on to celebrate in the Star Financial Victory Lane, winning by less than a half-second over Burrus with Cody Lein coming home in third.
Morristown driver Jeff Marcum is now a perfect four for four in feature wins in the McGunegill Engine Performance Late Models.
Anderson driver Dustin Burge took the earl lead chased by Joe Woodring, fast qualifier Danny Trent and Marcum.
On the sixth lap Marcum got inside of Trent entering turn one to move into the second spot and set his sights on Burge.
Seven laps later Marcum got inside of Burge entering turn three to take the lead he would never surrender. Trent passed Burge a lap later coming off the second corner.
Marcum went on to win followed by Trent, Burge, Rich Segvich and Woodring.
Ronnie Rose took the lead from Earl Adams Jr. to record his third Thunder Car feature win in four events this season.
Rose had to hold off Adams through four different restarts after the halfway point. Ron Phipps, Tyler DeHart and Mike Warrell rounded out the top five.
In other racing action Cody Kennedy won the Indy Fastcarts feature and Mike Mucha recorded his first career win in CSR Super Cups action.