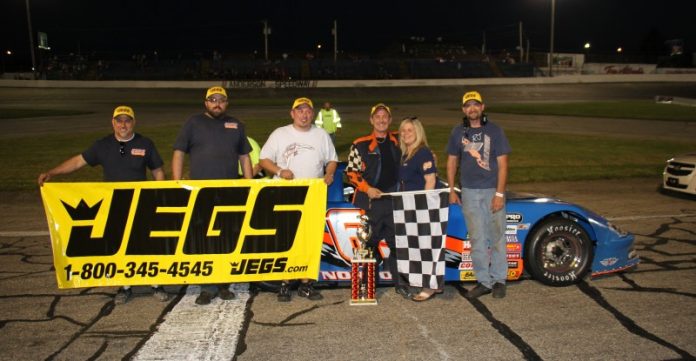 That first victory in a CRA Sportsman Late Model race once again eluded Jeff Marcum when a flat tire with 10 laps remaining gave the victory to R.J. Norton at Anderson Speedway.
Marcum took the lead from Tony Brutti on lap 25 following a restart with an outside move along the front straight on Saturday and quickly opened a comfortable lead on the field.
The Morristown driver survived four restarts and was in control of the race when a right front tire went flat entering turn one, Marcum barely missed contact with the outside wall. After the crew changed the tire during the caution period, Marcum rejoined the field in eighth place.
Marcum’s misfortune gave the lead to Norton, who had started sixth in the field chased by Jason Neal and Shawn Bonar. Before another lap could be completed Neal brought out the eighth and final caution when he spun in turn two.
Norton pulled away from Bonar on the restart with Marcum making a late race charge passing KC Spillers, Brutti and Thomas Hufford to claim the third spot.
Following Norton to the checkers were Shawn Bonar, Marcum, Brutti and Thomas Hufford.
After many years out of Hart’s Auto Figure-8 competition Anderson driver Ronnie Phipps turned in a dominating performance to capture the feature race.
Phipps jumped into the lead at the start with Curtis Chapman, fast qualifier Shawn Cullen and Joe Beaver battling for the second spot. That would be the way the race ended.
In the Marcum Welding Front Wheel Drive division feature Ron Phipps threaded the needle on lap 20 to take the lead from Jeff Williams to record his second feature win of the young season.
Williams took the lead on the second circuit and was challenged for the next 18 laps by Phipps and Nick Warner. When the leaders encountered lapped traffic, Phipps took advantage of the situation to slip inside of Williams and a slower car entering turn three to emerge with the victory.
Williams, Warner, Darek Morris and Bill Overshiner rounded out the top five.
Frankton competitor John Robbins remained perfect in two feature events for the Thunder Roadsters coming from the fifth starting position to take the lead on the fourth lap from Chad Cory.
Robbins was never seriously challenged for the win although fast qualifier Doug Dugger was slicing into the lead after moving into the second spot on lap 12.
Dugger would finish second followed by Marty Griffin, Cory and Rodney Oliver.
Kody Kennedy used a slingshot move entering turn one on the final lap to pass early leader RC Rigdon and then held on following contact coming to the checkers to win the FastCarts feature.