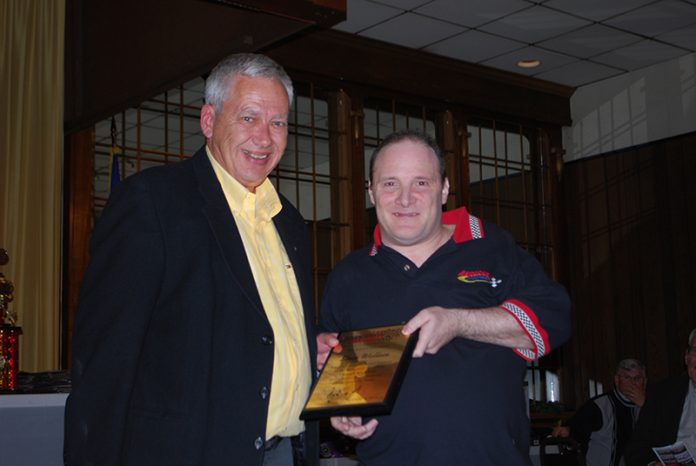 Anderson,IN— Retired Hall Of Fame Songwriter Steve Wallace’s song “Anderson Speedway” raised 1500 dollars which benefited the American Cancer Society for every time the song was played on his website.

Streaming Royalties for each time the song was played on Wallace’s website went to help fight Breast Cancer and other cancers through out the month of October.

“My Dad passed away from cancer when I was 8 along with other family members and very close friends,”including my publisher Beth Walker in November of 2014 said Wallace.

The song “Anderson Speedway” sung by Mark Sutton of Nashville , Tenn., Is currently being played in over 170 countries Worldwide and is the Most downloaded and played song on soundclick.com for 2014.

Wallace’s Song “Anderson Speedway” is the Theme song for the Anderson,IN race Track. Wallace also battles with ‘Dystonia” a disabling nerve disorder which affects his muscles and speech.

On Saturday November 8 wallace received a very special plaque from Rick Dawson President and CEO of Anderson Speedway during the 2014 awards banquet. The plaque reads: This Award is Presented to Steve Wallace “For his dedication and support of Anderson Speedway through his music and creative compositions throughout the years.”
Wallace said,”This was by far the best award I have ever received, it really meant a lot to me more than any Grammy or CMA award ever could.”

You can still hear the song “Anderson Speedway” here http://soundclick.com/share.cfm?id=12159502