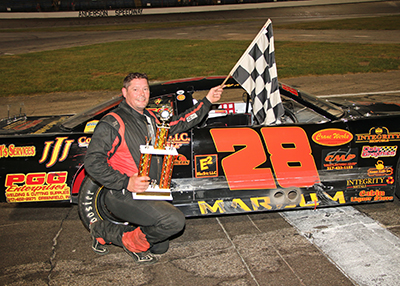 Deuces were wild at Anderson Speedway as three drivers all scored back to back feature wins in their respective divisions. Jeff Marcum, Jacob McElfresh and Chad Cory all recorded victories on Byrider Night at the Races on Saturday with Terry Eaton Jr. winning the Vore’s Compact Touring Series feature.

Marcum won for the third time this season in the McGunegill Engine Performance Late Model division holding off fast qualified J.P. Crabtree and Dan Leeck following a restart with 13 laps remaining. Marcum took the point from Danny Adams with an inside pass entering turn one on the 16 circuit. The driver on the move was Crabtree, who was the fast qualifier, and was running fifth at the start. He passed Ronnie Rose with an inside move on lap nine and then used the high groove to pass Leeck and Adams. Leeck also used the outside line to pass Adams on lap 22. The caution flag waved on lap 27 when Nick Kronenberg broke a power steering line. On the restart Crabtree could never attempt an outside pass of Marcum and an effort coming off the fourth corner on the final lap came up short by .199-seconds. Leeck, Adams and Kevin Gross rounded out the top five.

Elwood driver Jacob McElfresh made it back to back wins in the Vore’s Welding & Steel Street Stock division taking the lead from Randy Hoppes on lap nine entering turn three. Josh Poore experienced an engine problem in his Street Stock and ran the feature event in a borrowed Thunder Car. Poore rapidly climbed through the field and was running second with 17 laps remaining but was unable to close on McElfresh. McElfresh won by 4.6-seconds over Poore with Hoppes, Dawson Phillips and Joe Muldoon rounding out the top five.

Chad Cory led the entire distance to win for the third time in 2020 in Thunder Roadster action. Jason Powers came home in second less than a tenth of a second behind Cory with Doug Dugger claiming third.