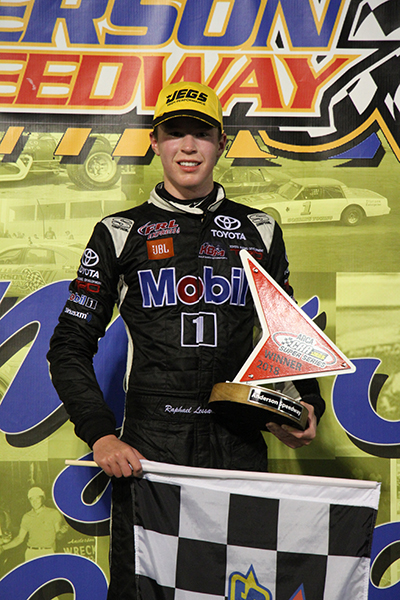 Canadian Raphael Lessard used the outside line to pass Johnny VanDoorn with 32 laps remaining to win the 52nd running of the Redbud 400.
A nice crowd waited out a rain delay to catch one of the more exciting Parallax Power Supply Redbud 400 presented by Mitch Smith Auto Service and Perfecto Tool & Engineering Monday at Anderson Speedway.
With the outside line coming into play before the halfway point the top ten cars on the lead lap raced side by side and nose to tail for all 400 laps.
VanDoorn recovered from a spin near the midpoint to work his way back to the front on lap 306 but he wasn’t able to hold off Lessard, who started 12th in the 25-car field.
Lessard had to hold off Steve Nasse on a restart with five laps remaining.
Nasse made a run at Lessard but was unable to get inside. On the final lap he tangled with Josh Brock. Brock came to rest against the turn three wall and Nasse penalized for rough driving and finished 13th.
“The car was good on the outside,” Lessard said. “I had something really good on the outside coming off of turn four. This is awesome.”
VanDoorn was credited with a second place finish followed by Austin Nason, Steve Dorer and Steve Wallace.
VanDoorn said he was out of tires after having to short pit on lap 192 following a spin while in the lead.
“I had tires that were 60 laps older at the end,” he said.
Nason said the team struggled all night but was pleased with the third place finish.
“We were good early when we changed left side tires, but we had a problem when we put on the right sides,” he said.
All the drivers acknowledged that there was tight racing all night on the quarter-mile high banked oval.
After running in the top two positions for most of the night Dalton Armstrong’s night came to an end with an apparent right front suspension problem on lap 317.
Johnny VanDoorn led the first 191 laps from the pole position chased the entire distance by New Castle’s Dalton Armstrong with the remainder of the top eight cars running in formation.
VanDoorn spun on lap 191 in turn two after tangling with a lapped car that gave Armstrong the momentary lead. All the leaders elected to make their first pit stop,  which gave the lead to Austin Nason, making his first career start at Anderson Speedway.
Nason led until lap 253 when Armstrong took the lead with an inside pass on the front straight. Raphael Lessard was the driver on the move taking advantage of the high groove to pass Chandler Smith and Nason and closed on Armstrong.
Lessard took the lead on lap 283 and led until all the leaders made their second stops on lap 296 which put Hunter Jack on the point.
There were eight lead changes among five different drivers and a total of nine cautions for a total of 100 laps.
The finish: Raphael  Lessard; Johnny VanDoorn; Austin Nason; Steve Dorer; Steve Wallace; Chandler Smith; Hunter Jack; Eddie VanMeter; Greg VanAlst; Chuck Barnes Jr.; Jeff Marcum; Dakoda Armstrong; Stephen Nasse; Josh Brock; Jon Beach; J.P. Crabtree; Austin Kunert; Dalton Armstrong; Brandon Oakley; Logan Runyon; Rich Segvich; Harold Fair Jr.; Ryan Issacs; Jack Dossey III; Brett Robinson