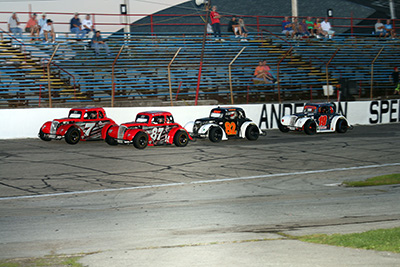 The biggest event of the season for competitors in the Legends Division at Anderson Speedway, is set for this Saturday.
The 22nd annual Grant Fritz/Greg Dietzen Memorial will highlight Saturday Night Racing presented by Star Financial Bank Night  with the second appearance of the Champion Racing Association Street Stocks on the schedule as well.
Ohio driver Zach Miller will be seeking his fourth consecutive win in the Fritz/Dietzen 50 lap feature.
The race is divided into two 25-lap segments.
Miller has battled his older brother Ryan, for feature wins on the lightning fast high banked quarter-mile oval.
Ryan Miller is the most recent winner beating his brother by .022-seconds, the closest finish in the division’s history at the iconic speedway.
A strong field is expected including local drivers John Robbins and Mark Dietzen.
The CRA Street Stocks return for a 75 lap feature. Josh Poore won the 200-lap event earlier this year.
Elwood’s Jacob McElfresh is the current point leader.
The series returns for a final time on Sept. 15 in one of the four championship chase races.
The VROA Modifieds will be making their final appearance of the season. Tom Boorsma won the touring series first trip to Anderson with his son Ryan winning the most recent event.
The Thunder Roadsters return to action where Rodney Oliver scored his first career feature win last Saturday.
There have been four different feature winners in 2018 including Doug Dugger, Dave Osborn and Chad Cory.
Qualifying is set for 6:30 p.m. with racing action at 8 p.m.
Adults tickets are $12, $4 for children between 6 and 12 years of age and under six admitted for free.