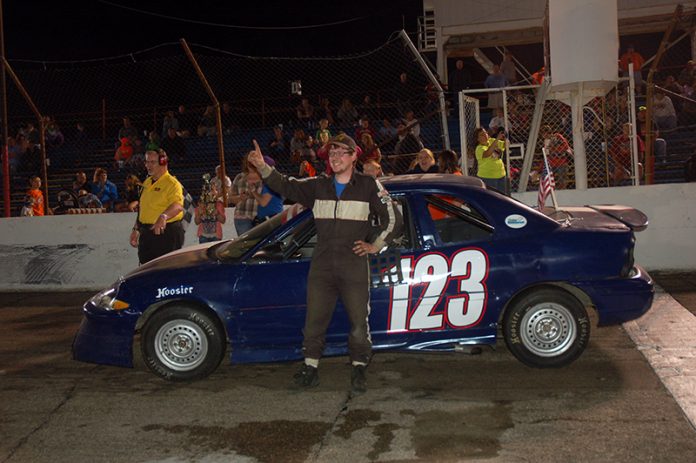 With 35 cars in the pit area for the second race of the season for the Vores Compact Touring Series race the competition was expected to be close and the drivers didn’t disappoint the fans on Madison County Storm Water Management night.

A week ago Lee dominated the Anderson Pro Compact division but would have a challenge for the win.

The early lead was taken by Larry Hughes Jr. chased by Nick Warner and Lee, who started fourth.

Lee passed Warner with an inside pass on the front straight on the second circuit and three laps later used a similar move to slip inside of Hughes for the lead.

With Lee on the point fast qualifier Gary Eaton Jr. was working his way to the front passing Hughes on the ninth lap and getting inside of Warner on the 12th lap coming off the second corner.

The race’s only caution flag waved on lap 17 when Joe Jennings lost an engine and it allowed Eaton to line-up alongside of Lee for a battle for the lead.

When the International Auto Auction green flag waved Lee was able to maintain the lead, but Eaton stayed glued to his rear bumper until the checkered flag waved.

“I hope it keeps going,” Lee said of his winning streak. “I like racing with these guys, everyone races clean. This is pretty awesome.”

Advancing to the feature race through a Last Chance race were Andy Jennings and Jared Keller.

It was a tough night for Bill Honious and Chris Jennings. Honious scrapped the outside wall in his heat race and was running second in the Last Chance when his car suddenly slowed.

Jennings could never get the handle on the track and after an early charge during the last chance race slowed while running third.

Hughes led the entire distance to win the first heat race. Warner won the second race with a pass of Steve Vore on lap eight on the front straight.

David Daughtrey took the checkered flag in the third heat race after passing Matt Tharp with an inside pass entering turn three. But when he failed the technical inspection the win was given to Brandon Clark.

Trent Gossar making his first ever start in the Pro Compact car was able to pass Holly Eaton on the second lap and held off a rapidly closing Lee and Masters for the win.