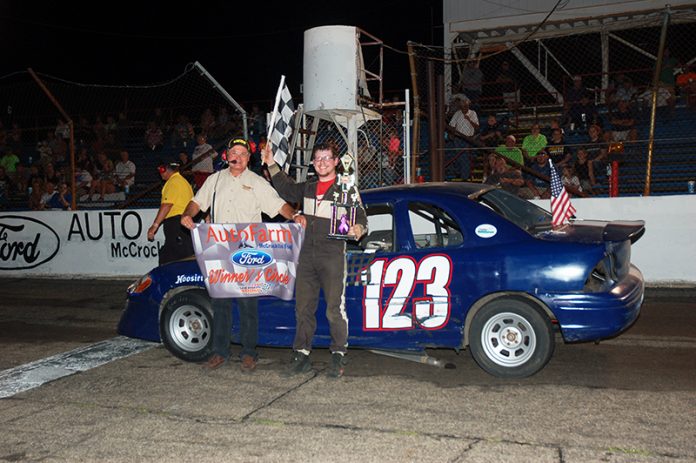 After missing several Marcum Welding Pro Compact races Adam Lee recorded his third feature win in a fight with five other drivers for the lead at Anderson Speedway.

Early leader Ryan Claborn bounced off the back straight wall on the second lap which put Kevin Harmon on the point.

Lee passed Jared Keller on the restart to move into the second position and made an inside pass on Harmon entering turn three on lap nine.

From there Lee’s position was threatened by Trent Gossar, Harmon, point leader Matt Tharp and Dylan Hoppes through three restarts.

On the final Interstate Auto Auction restart with six laps remaining, Lee maintained the advantage with Gossar getting trapped on the outside losing several positions.

“I love tight racing, it was a lot of fun,” Lee said. “I didn’t know if I could hold him (Gossar) off. I was nervous on the final restart.”

Following Gossar to the checkered flag were Dane, Ryan Claborn, Lee and Keller.

Matt Tharp started third in the second heat race and first passed Andrew Teape for the second spot with an inside pass entering turn three and set his sights on leader Billy “Rootin Tootin” Hooten.

On the seventh circuit Tharp got inside of Hooten exiting the second corner to take the lead with Dylan Hoppes getting around Hooten on the next to last lap in turn three.

Tharp was followed to the finish line by Hoppes, Hooten, David Powell and Randy Hoppes.

Rickie Tharp III scored his first career win at Anderson Speedway with the help of lapped traffic on the final lap to get around Jeff Kidd.

Kidd led from the start but entering turn two on the final lap got caught behind a lapped car which allowed Tharp to make the winning move.

Following Tharp and Kidd to the checkers were Bill Overshiner, Justin Eiler and Cory Slavey.