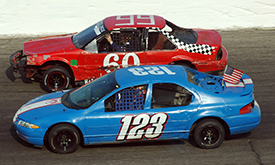 Two-wide racing was the rule in the best racing of the young 2014 racing season for the drivers in the Front Wheel Drive Oval Division last Saturday at Anderson Speedway.Adam Lee scored his first career feature win when apparent winner Nick Warner was disqualified during post-race tech inspection for using a set of illegal engine heads.Although Lee was awarded the victory, he had to work for it coming from the 15th starting position as for the first time this season there was a full-field inversion.The early lead was taken by Austin McKinney, chased by Brian Slavey and Billy Hooten.Hooten’s run at the front of the field only lasted one lap when he tangled with Marshall Clark and Jerry Dane in turn three. The incident ended Dane’s quest for four wins in a row.On the restart Slavey took the lead with an outside pass of Austin McKinney with the cars starting in the back making their way to the front. The front running cars were in a tight pack until the second caution flag waved on lap 14.Warner took the lead from Slavey with an outside pass entering turn one and Lee followed with an inside pass of Slavey entering turn three on lap 17.Behind Warner and Lee, Kevin Henson, Kevin Harmon, Slavey and Dylan Hoppes battled for the third position.Henson spun on the back straight with Harmon following Lee to the checkers with Slavey, Hoppes and Ron Phipps rounding out the top five.The first heat set the stage for the feature event with the top six drivers running side-by-side for most of the 10-lap distance.Phipps grabbed the early lead and led until lap seven when Dane was able to get the preferred inside groove exiting turn four to take the lead.Dane was followed by Clark, Jeff Williams, Phipps and Henson.Slavey recorded his first win ever at Anderson Speedway taking the lead on lap five when early leader Austin McKinney was black-flagged for turning laps faster than his qualifying time.There were some fireworks on lap six when Brian McKinney and Jesse Thomas tangled on the back straight and the feud continued with the caution flag waving onto the front straight.Hooten finished second with Brandon Lee Cook, David Powell and Warner rounding out the top five.