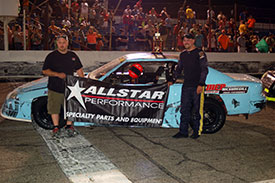 When opportunity knocked, Muncie driver Bret Miles Jr. opened the door to make a bold pass with two laps remaining to capture the CRA Street Stock 200 Saturday at Anderson Speedway.Miles used the high line entering turn three to rocket past both race leader Jimmy Kirby and Josh Poore to emerge out of turn four with the lead.With Miles in the lead Kirby spun coming off the fourth corner on lap 199 which gave second place to Poore with Jason Atkinson coming home in third.For most of the second half of the race Kirby and Poore jostled for position running nose to tail.Poore took the lead from Miles on the lap 101 restart with Kirby moving up to third on lap 108. Miles who led 97 of the first 100 laps dropped back to sixth in the early stages of the second half of the race.With 28 laps remaining Miles used the outside line to get around Calvin Parham for third and set his sights on the two leaders. At times Miles was turning laps three-tenths of a lap faster than Kirby and Poore.A caution flag on lap 195 for a spin by Fred Hopkins turn two, set up the final five lap sprint for the win.“I was just waiting there,” Miles said. “I took my opportunity when I had it.”Miles said before the second half the team decided to drop back if the other drivers were getting aggressive.“In the first half I was protecting my lead,” he said. “We made some adjustments to the car. It took a long time to pass the 33 (Calvin Parham). After that I was coming, the car was really good.”Miles not only earned $3,000 for the win, but picked up an additional $500 for finishing second in the CRA Triple Crown point standings.Poore said the two front-runners slowed down, which allowed Miles to make the late charge.“I didn’t know how close he was,” Poore said of Miles. “It was the last laps; you have to go for it.”Atkinson said it was a steady run for the team, but the car was loose coming off the corners.“I couldn’t get any grip on the inside coming off the corners,” he said. “I could run with them but didn’t have anything to compete for the win.”Brett Hudson, the winner in the Triple Crown race in Kentucky had a mechanical problem on lap 155 while running third.With his third place finish Atkinson won the CRA Street Stock Triple Crown for 200-lap races in Ohio, Kentucky and the closing event at Anderson Speedway.Atkinson said the team was able to complete all 600 laps of the Triple Crown.Anderson driver Dustin Burge took the early lead but stayed on the point for only two laps when Miles used the outside line on a restart following a red flag when Michael Walls made contact with the turn three outside retaining wall.Burge stayed in the second spot until lap 46 when Kirby was able to make the pass and Poore moved up a spot on lap 69.Poore moved into the second spot on lap 82 and challenged Miles until the halfway break.Fast qualifier Jeff Lane had a mechanical problem on lap 25 and finished 32nd in the 36-car starting field.There were six lead changes among four drivers. The race was slowed by 10 caution flags for 61 laps and red-flagged twice.