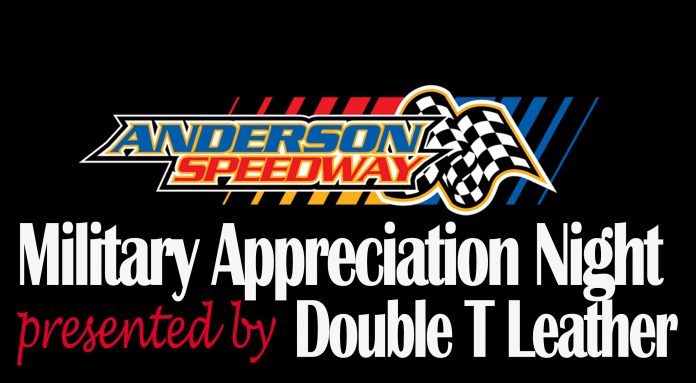 Anderson Speedway returns to action this Saturday with a diverse racing program featuring a special 75-lap feature for the McGunegill Engine Performance Late Models.
Four divisions are competing on what has become a tradition at the Anderson speed plant of Military Appreciation Night Presented by Double T Leather with all active military and veterans admitted free.
A large field of late models is expected for the first of a trio of special MEP Late Model contests with the winner earning $1,500. The second event is a 100-lap feature for the Champion Racing Association Sportsman Late Models on July 14.
Last year Scotty Tomasik held off two-time defending track champion Jeff Marcum.
There is a large field of Vore’s Welding & Steel Street Stocks this weekend in anticipation of the CRA Street Stock 200 on June 16. Travis Burge has claimed the first two wins of the season.
The K & M Tool Mel Kenyon Midgets will be making their second of seven appearances for the Parallax Power Supply 30.
The Marcum Front Wheel Drive Division where Randy Owen is a perfect two for two on the season will round out the competition.
Qualifying is set for 6:30 p.m. with racing action at 8 p.m. Adults tickets are $12, $4 for children between 6 and 12 years of age and under six admitted for free.