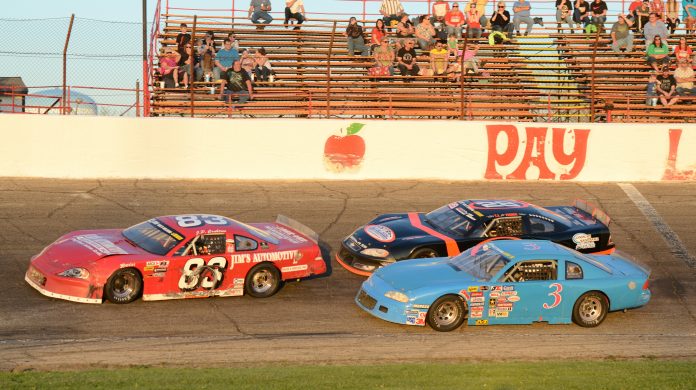 All active members and veterans of the U.S. Armed Forces will be admitted free to Anderson Speedway this Saturday.
Military Appreciation Night is being sponsored by Double T Leather and will feature the Champion Racing Association Sportsman Late Models and the McGunegill Engine Performance Late Models in a 75-lap event.
Current CRA series point’s leader Terry Fisher Jr. got the win in the series last two events of the season, including the series event on April 16th at Anderson Speedway and the series last event on May 6that Lucas Oil Raceway.
Jeff Marcum is the current points leader with the Anderson Speedway McGunegill Engine Performance Late Models, he got the win in their series last event on May 21st. Jack Dossey III picked up the win in their 2016 season opener on March 26.
The Street Stocks will be in action leading up to the CRA Street Stock 200 on June 25 the last of the Triple Crown races. Anderson’s own Josh Poore won the opening event in Ohio and Chuck Barnes Jr. captured the victory in his home state of Kentucky.
The Hart Figure-8 Division will be in action where three different drivers have claimed wins. Defending champion Jeff Swinford is the most recent winner, joining Shawn Cullen and Ronnie Rose.
The Thunder Roadsters return where Frankton driver John Robbins has won two consecutive feature races.
Qualifying is set for 6:30 p.m. with racing action starting at 8 p.m.
Adult tickets are priced at $12 with $4 admission cost for children between the ages of 4 and 12.