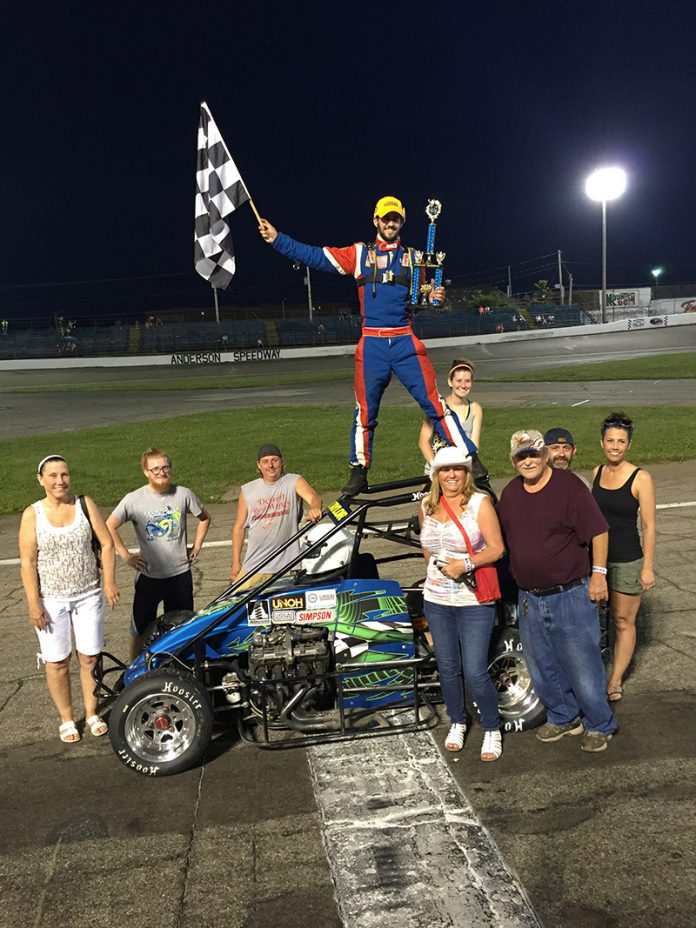 A dramatic last lap pass vaulted Dameron Taylor to victory in Kenyon Midget action Saturday at Anderson Speedway.
For almost 30 laps Taylor ran his Kenyon Midget in the tire tracks of leader Nick Hamilton continually looking for a way to make the pass and claim his first feature win of the year at Anderson.
On the final lap Taylor made a daring move driving to the inside of Hamilton entering turn three and the two ran side by side through the corner.
They touched wheels in turn four with Taylor claiming the advantage and Hamilton’s night ending in the infield following a spin coming off the final corner.
Trey Osborne, who ran close to the two leaders for most of the race, finished second followed by Ryan Huggler, Chase Jones and Logan Huggler.
Hamilton was credited with a tenth place finish following his spin.
Marcum Welding Pro Compacts
For several weeks Ron Phipps has been knocking on the door for that first victory of the year and on Saturday he became the fourth different winner in the Marcum Welding Pro Compacts feature.
As a result of the invert, Phipps started on the pole positon but the early leader was Jeff Williams.
The two were chased by defending series champion Matt Tharp, Nick Warner and Brandon Lee Cook.
After racing side by side for the first three laps, Phipps was able to take the lead from Williams with an inside pass on the front straight.
From there Phipps maintained the lead but Tharp and Williams were never more than a car-length behind.
At the checkers Phipps beat Tharp to the line by less than two-tenths of a second followed by Williams, Warner and Cook.
VROA Modifieds
Michigan driver Tom Boorsma remained unbeaten in Vintage Racing Organization of America Modified racing at Anderson Speedway, but it too a nifty move to take the lead.
Ryan Boorsma took the early lead and was passed by Glenn Parker on lap seven as Boorsma and Don Deyman worked their way toward the front.
On lap 11 while running fourth and fifth, Boorsma and Deyman went to the bottom of the race track in turn three to pass both John Evans and Ryan Boorsma to claim the second and third spot.
Three laps later Boorsma slipped inside of Evans coming off the fourth corner to claim his second win at Anderson Speedway.
Boorsma was followed to the checkers by Evans, Deyman, Terry Bryne and Rob Parker.