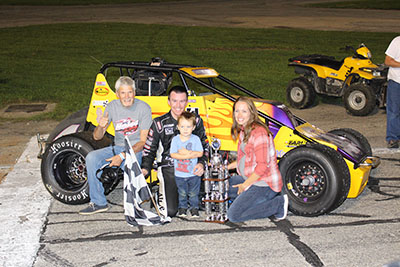 It was only fitting that at the end of the 18th annual Glen Niebel Classic it would be a V6 powered sprint car that pulled into victory lane at Anderson Speedway.
Niebel won six Pay Less Little 500 classics with the V6 power plant and two Gene Nolen cars claimed the top two spots.- on Thursday.
Jerry Coons Jr. led 124 of the 125 laps but a lapped car on the final lap allowed teammate Kody Swanson to get inside coming off the second corner to record his third consecutive non-wing sprint car race on the high banked quarter-mile oval.
Swanson won by .29-seconds over Coons followed by Caleb Armstrong, Justin Grant and Bobby Santos III.
The race heated up with 26 circuits remaining by a spin by Kyle Hamilton in turn two. On the restart Coons led Swanson with Bobby Santos III and Caleb Armstrong.
With 17 laps remaining Santos attempted to make an outside pass on Swanson when the two touched with Santos spinning to a stop in turn four.
It was the second time Swanson made contact with another car during the race.
Swanson said the panhard bar in his car broke with ten laps remaining but the lapped car allowed him to pass Coons.
It was Swanson’s third win at Anderson Speedway which includes the 70th running of the Pay Less Little 500 in May.
Coons opened a comfortable lead over Justin Grant and Aaron Pierce before the first caution flag waved after ten circuits.
Swanson started eighth in the field moving into the top five after an inside pass of Santos in turn two.
Pierce and Swanson got around Justin Grant on lap 56 and the two drivers that have dominated non wing sprint races at Anderson Speedway battled behind leader Coons.
Pierce spun on lap 65 while running second after a bump from Swanson. He parked on lap 72 with an apparent ill-handling  race car.
Swanson set fast time during qualifications turning a lap at 11.337-seconds. Fourteen of the 21 cars that made qualifying attempts were within a half-second of Swanson’s time.
Two time defending Thunder Roadster champion Dave Osborn picked up his fourth win of the season.
Osborn passed current point leader Chad Cory and went onto the victory. Rodney Oliver came home in third.
Josh Tharp claimed the victory in the Hart’s Auto Figure 8 feature after a long battle with Nick Warner.
Point lead Shawn Cullen was forced from the competition with a fluid