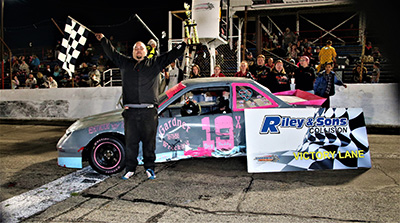 Plunkett took the lead early in the race and was chased by fellow Buckeye state competitor Alec Young and Terrill Willhoite, the most recent feature winner in the division. The caution flag waved on lap two when Colin Grissom made heavy contact with the outside retaining wall on the back straight. McKinney moved into the second spot on lap five and for the next 12 laps was glued to the rear bumper of Plunkett’s car. As the two leaders encountered lapped traffic McKinney was able to use the outside groove to take the lead on the front straight. McKinney went on to win by a half-second over Plunkett with Young, Willhoite and Thomas Winger rounding out the top five.

“I’ve got this car handling,” McKinney said after the win. “Anyone out motors me, but they can’t out handle me. “Finally lapped traffic worked in my favor,” he said. “I think this is the only time it has happened.”

Plunkett led the entire distance to claim victory in the first of two heat races with Grissom claiming the second spot with a pass of Young on lap seven. Ohio driver Damien Weigel passed Tyler Willhoite with four laps remaining to record the win in the second heat race with Thomas Winger coming home in third.