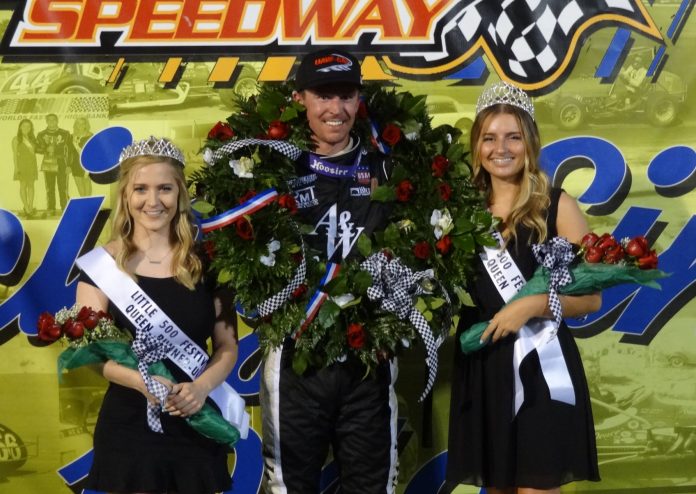 California driver Kody Swanson claimed his second Pay Less Little 500 victory in three years after a thrilling three-car battle over the final 50 circuits at Anderson Speedway on Saturday.
The race unfolded with 61 laps remaining with Shane Hollingsworth holding a one-lap lead over Swanson and Jacob Wilson, both on fresher rubber. The two drivers were back on the lead lap with 48 laps remaining and were rapidly closing on Hollingsworth.
Swanson made the ultimate race winning move when he got inside of Wilson on lap 470 and took the lead from Hollingsworth on lap 478.
It was the first Little 500 win for long time car owner Gene Nolen.
His two second victory over Wilson is one of the closest in the 70 year history of the Pay Less Little 500 presented by UAW-GM.
Wilson, Hollingsworth, Mickey Kempgens and Scotty Hampton rounded out the top five.
Kyle O’Gara was named rookie of the race after starting 15th, but a mechanical problem resulted in a 24th place finish.
It appeared Wilson made the right call by stopping for fresh tires near the halfway mark of the race.
Wilson got back on the lead serial on lap 327 and was turning laps at 3-tenths of a second than Swanson, who had not made his second stop.
The lead change came on lap 382 when Wilson got inside of Swanson in turn three. Shane Hollingsworth who led 60 laps got back on the lead lap the 379th circuit after pitting on lap 303.
When Kody Swanson spun on lap 411 Wilson surrendered the lead to Hollingsworth, who was the only car on the lead lap.
Aaron Pierce dominated the first half of the race but a pit stop on lap 241 while leading cost him four laps to the leader.
Pierce took the lead from pole sitter Davey Hamilton Jr. on lap 27 with an inside pass on the front straight. The two ran at the front of the field until the mandatory pit stop before lap 250.
Hamilton’s race ended on lap 254 with an apparent mechanical problem.