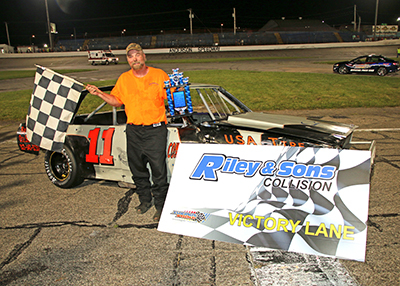 Just as he has done for most of the 2021 season Jimmy Kirby continued to dominate the ThunderCar Division at Anderson Speedway. Kirby led all 50 laps Saturday to capture the 72nd running of the National Crown presented by Beaumont Rehabilitation and Healthcare Center. It was the sixth win for Kirby in seven feature races in the division and marked his victory in the biggest race of the year for the ThunderCar competitors.

Kirby set fast time during qualifications that earned him the pole position with Ronnie Rose starting outside the front row with Ron Phipps and the 2019 National Crown winner, Dustin Sapp, in the second row. At the start Kirby jumped into the lead chased by Rose, Phipps and James Kirby III. The younger Kirby’s night ended on lap seven with a mechanical problem that brought out the first of three cautions on the night. On the restart Kirby was able to hold off Rose with Ron Phipps and Sapp in close contention. Rose’s night ended on lap 22 when he pulled into the pit area during a caution for debris on the track. Ron Phipps was able to stay in close contact with Kirby on the restart but his night ended on lap 32 with a faulty transmission. The final caution flag waved on lap 43, wiping out a comfortable lead for Kirby over AJ Stewart and Frankie Oakes. Oakes moved into the second spot on the restart but was unable to contend for the victory. Kirby won by 1.1-seconds over Oakes with Stewart, Randy Owen and David McConnell rounding out the top five.

Frankton’s John Robbins became the first Legends driver to score two victories in 2021.Thanks to the invert following qualifying Robbins and teammate Xavier King started on the front row. King took the early lead with Robbins moving to the point on the third lap with Dalton Conner claiming the second spot on the next circuit. But Conner spun on lap 6 which put Drew Evans outside of Robbins for the restart. Evans led lap 7 with an outside pass of Robbins on the front straight with the two running side by side. Robbins reclaimed the top spot the next lap. Robbins had to hold off Evans for a final restart on lap 12 after Conner spun for a second time in turn two. At the checkers it was Robbins winning by .785-seconds over Evans with King rounding out the top three.