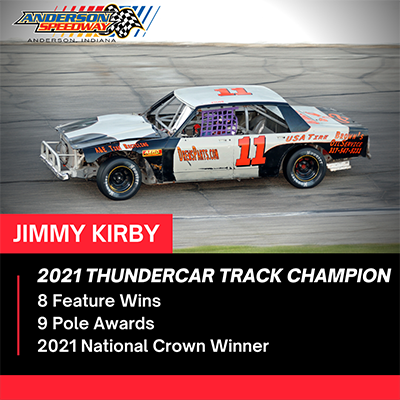 Springport driver Jimmy Kirby capped off an incredible season with his 8th feature win in the ThunderCar Division. Kirby set fast time at all nine events and aside for a racing incident in a heat race early in 2021 won a total of eight feature races.

Kirby led the entire distance on Season Championship Night hosted by Cintas to close out a dominant season. Ron Phipps, second in the point chase, ran second early in the race but dropped back as Michael Phipps, Frankie Oakes and Randy Owen all gaining positions. Ron Phipps started working his way back to the front just before the halfway point running second to Kirby. The caution flag waved when Oakes lost a motor on lap 27 which set up a four lap shootout to the finish .

Kirby pulled away on the restart to win by 2.3-seconds over Ron Phipps, Michael Phipps, Jameson Owens and Ricky Craig. “This car has been fast all year,” Kirby said in the Riley & Sons Victory Lane. “We just kept working on the car every week to make it better. “We race for fun,” he said. “This season has been fun.”

Thank you to all competitors, fans, and staff for making our 2021 season a success.  Stay tuned for our 2022 schedule release.